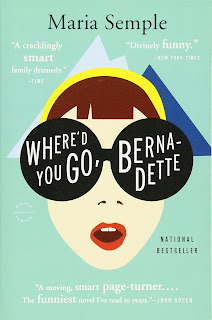 This book was not at all what I expected, and that makes it all the better.

Where'd You Go, Bernadette  by Maria Semple has been sitting on my shelf for years. When it first came out in paperback, it had great buzz — but I wasn't sure I wanted to read about a teenager who runs away to Antarctica. The story seemed too light-hearted for the subject matter, so I let the novel linger on my shelf.

That is, until it became my book club's book, in no small part because of the the movie debut. Suddenly, I had two good reasons to find out about the girl who ran away to Antarctica: book club and a movie.

Not to over-sell it, but the story was a roller coaster of surprises, intrigue, investigation, and revelation. What we learn about these characters is intimate, honest, and touching. And love: there was so much love, I felt it on every page. Semple loves her characters, even when they fail in epic proportions, and readers in turn love them as well — sometimes because of their failures, because isn't that what actually gives someone character?

(Full disclosure: I am not keen on Hollywood's retelling of a perfectly good tale, but I like Cate Blanchett. I am not convinced that Cate is Bernadette, but Cate is such a chameleon, I would love to see her play the part — and let the chips fall where they may. The actual storyline, however, is in question: I have seen the trailer, and what I thought was a surprise at the end of the book is revealed during the trailer like it was part of the plan from the start. What in the world...)

If you haven't read the book, I may tell too much in this review. Be warned, in case you are like me and prefer surprises.

First of all, I got the premise wrong: the teen isn't the one who goes missing. It's much messier and more unusual than that: Bernadette is a quirky mother of a teenage daughter, Bee, on whom she bestows much love and trust. Elgin is the massively successful engineer who is never present in his family's life. He doesn't pay attention to his family, trusting it will be there and functional when he looks up from his pressing work deadlines.

If only life worked that way. Bernadette doesn't suffer fools lightly, and she worships her precocious daughter — whom she is convinced needs to attend a prestigious elite school on the opposite coast. Bee, on the other hand, wants only to please her parents, and keep her mother happy. Bee's latest stellar report card allows the star student to ask her parents to take her to Antarctica.

Only, the trip doesn't go off as planned. In fact, nothing does — and at a certain point, chaos reaches critical mass, and Bernadette goes missing.

I loved the quirky characters: Bernadette, who was "eccentric" beyond all expectations and hid her mental illness from her family (badly), but the person who needed to be present wasn't; Elgin, a brilliant inventor who was able to escape into his fictional Microsoft World and not deal with reality; Bee, a precious, precocious tween who was too smart, compassionate, and passionate for her own good; Audrey, the mean schemer who, in the end, became one of my favorite characters; the school, which truly was a character unto itself, and so much funnier than any individual or group in the book; Soo-Lin, who got just as lost as everyone else but lost herself more than the others.

I liked how the character of Bernadette was so different than she appeared at first glance. She made perfect sense when you got to see her beyond her appearance.

Bee's unwavering faith in her mother was so perfect, and Bernadette in the end deserved every drop of it. We are everything we have been and everything we will be, all at once. So much of our lives, our truths, remains masked or hidden, or just not shown to everyone. This book is an important reminder that no one is only what they seem to us at the time.

I recommend this book: meet some amazing characters that will stay with you long after you you finish the last page, and be ready to hand your copy over to a friend or compatriot who really needs to read it.
Antarctica architect bernadette characters depression loss Maria Semple Microsoft Seattle Where's You Go Bernadette