Showing posts from November, 2011
Show all

Review: The Map of Time 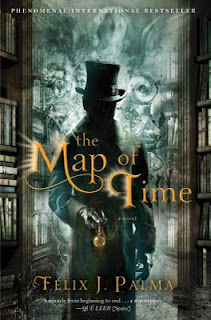 When I read a short description of Félix J. Palma 's The Map of Time , I thought it was right up my alley: time travel, H.G. Wells, Jack the Ripper and things going wrong.  Alrighty, then, where do I sign up? It was nothing like I expected — and it was utterly delicious. It begins with a young man who wishes to die because his love already is dead.  However, this man is given hope: time travel.  It is Victorian England, near the end of the 19th century, and technology is slowly becoming the new God in this Industrial Age.  In the shadow of the Crystal Palace, where technology showed the way to the future, one can guess how easily duped are the public who want to believe. But what happens if it's the truth after all? The novel manages to drop names and draw in the most unexpected characters, both actual and fictional.  The story jumps between love gone wrong to love gone wrong, to — well, it's not all "love gone wrong," but if Miracle Max will work to ben
Post a Comment
Read more
More posts