Review: The Baltimore Book of the Dead 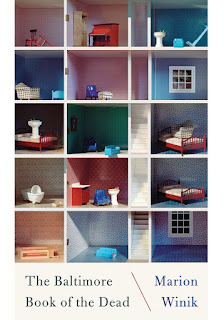 Precious: that is how Marion Winik sees the people whose lives she remembers in The Baltimore Book of the Dead, a modest collection of vignettes about unforgettable people in her life who have passed away.

Some of her subjects are identified: mother, aunts, cousins — never by name, but always by characteristics and personality. She goes farther afield and remembers colleagues, childhood friends, casual acquaintances, and friends of friends who made impressions on her.

Other times she tells the truth but tells it slant: a well-known Southern author, for example, or a public figure from her crowd. I had to scour the clues in her tales to know who she knew, and on more than one occasion spend more time than I ought collecting words to include in my Internet search. (Yes, I was successful. Neither Winik nor the Internet failed me.)

But it's not the who that is most intriguing. We all have people in our lives precious enough to us to remember. It's the details, the truth, that make these sketches so intimate, sometimes charming, and always as memorable to us as the person is to Winik.

Her descriptions of the people and their charm, foibles, character, and connections are precise, spare, and exquisite. You can open any page and find what you swore was your favorite vignette, only to discover you have a new one.

Take "Portrait of a Lady:"


She picked up the .22 and aimed it at him. My brother grabbed me as we went for cover.  Later he explained: you always want to be behind the one with the gun. A shot cracked, and a bullet zinged into the wall over the refrigerator.

Yep, said my dad. I'll be in the shower.


When you're eighty, a lot of things are long ago: tough decisions, hard times, regrets, all far away now. Watching him in his garden, or with our little girls in the shallow water, you could get the idea he'd been waiting all his life just for this. To be a deeply tanned, slightly stooped old Jewish man, standing at the water's edge in turquoise trunks and a white terrycloth bucket hat. Surely if he'd been given the chance, he'd be standing their still.


Not all of the characters are likable. Not all of them are intended to be. Death doesn't make you better; it just ends your chance at redemption.

The title was a bit of a misnomer: these are not all Baltimore residents or figures. Winik lived in Baltimore at the time she wrote the book. The same for The Glen Rock Book of the Dead.

In September, look for The Big Book of the Dead, in which vignettes from both books will be arranged in the order that tells Winik's life story. When I learned that, I nearly stopped after reading the first couple of vignettes — but I couldn't wait to read this book, and neither should you.
biographies life stories Marion Winik The Baltimore Book of the Dead vignettes