Review: Behind the Scenes at the Museum 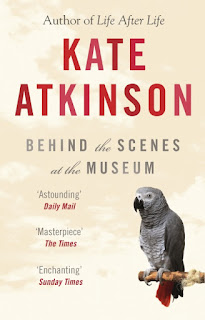 Get a glimpse behind the façade when Ruby Lennox shows us what it takes to make and live in a family in Behind the Scenes at the Museum. The titular museum is York Castle Museum, which exhibits façades of local houses, much like the one occupied by the Lennox family. As Kate Atkinson weaves her tale, Ruby’s first day is spent in part at the Museum Gardens, with her mother and sister, Gillian.

I loved the structure of the book: beginning with her conception, Ruby is very much in the “now,” and everything feels immediate and new, with glimpses of foretelling the future. Coupled with these current events are  “appendices” interspersed non-sequentially, revealing family secrets that challenge the fictions perpetrated in the family history Ruby tells. She knows what she knows, so her tale is limited to her scope of knowledge, what she sees and believes.

Ruby is our narrator, but is she reliable? Clues pop up indicating that something is flickering just beyond her reach, a memory she can’t quite grasp, that perhaps she is more than she seems. In fact, Ruby’s reveal near the end of the book was seeded through the entire novel, with clues that Atkinson at times thought were heavy-handed. (I didn’t.) Other characters weave through the story in surprising ways, such as Auntie Doreen, Sister Blake, Jack, Edmund — even inanimate characters, like Alice’s buttons, mantel clock, and silver locket.

I enjoyed reading the wartime tales. Atkinson captures the abject terror and drudgery of both world wars, the second of which she explored in two other amazing books: Life After Life and A God in Ruins. I saw Teddy in Edmund, and now I feel as though I must  re-read the bomber scenes in the Todd Family series.

People die all the time, or disappear, or are wounded, or show up at unexpected times and places. Ruby’s loss of sisters in this tale is sad, but her attitude toward Gillian makes a lot more sense as the family story unfolds. Auntie Babs’ breast cancer, Ada’s diphtheria, Tom’s hand, Lawrence’s bad timing on the English coast, all amazing tragedies befallen by the Lennox forebears.

Death was definitely a character. Ruby didn’t shy away from it, but she experienced it as was appropriate for her age. The sisters were not present for Gillian’s funeral and the finality that part of the mourning process provides, so to Ruby and Patricia, Gillian was “if not exactly alive then not exactly dead either.” The timing and circumstances of George’s death were unfortunate, but Ruby knew he was dead — she witnessed and was a part of it differently, and at a different age and life stage, than she was for Gillian.

The people I loved most were Lillian, the strong-minded single mother who bravely hopped on ocean liners and cross-continental trains; Lucy-Vita, an affectionate cousin and patient friend; and Adrian, the hairdresser who just lived his life and loved his family (and proved to be a loving caretaker for Bunty). I despised Rachel’s black heart and Bernard’s cruelty, and had little sympathy for Bunty (despite Ruby’s story arc). Bunty and George were a pathetic pair, and I am at a loss as to how they managed to keep as many of their children alive as they did for as long as they did. The Ropers were hysterical, as much because their own absurdity as by George and Bunty’s responses to them.

Atkinson had some brilliant moments, coupling Ruby’s story reveal with the Lost Property Cupboard, poignantly and gracefully bringing sisters together and parting them, capturing the energy and dynamics of an extended family. There were a few beautiful observations, that the past is what you take with you, that nothing is lost forever, that everything resolves itself (Adrian’s identity, marriage entanglements, leavings and returnings, motherhood). As Ruby shows us, the deft distribution of family throughout the world — intentional or accidental, known or unknown, secret or revealed — create a unique, powerful, perfectly imperfect mosaic.

The British, when talking about their family members, use the term “our,” such as “our Gillian” or “our Pearl.” I first read this in Good Omens, and wondered if it was made up for the scene in which it was used. It wasn’t, and I find it utterly charming. 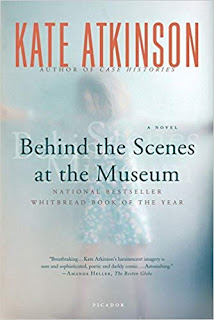 Did anyone else get lost from time to time when trying to keep track of who was in which generation? What a huge cast of characters!

For the record, the paperback copy I own features the cover at right, which is very different than the cover I posted at the top of the review. I prefer the parrot cover.

I think — I am a bit of a purist when it comes to covers, and this debut novel doesn't need to mention future works by the same author. Do you have a preference? What's your take on covers: do you prefer the original covers, or do you like redesigns as the author's canon evolves?