Showing posts from July, 2010
Show all

By Any Other Name

I have begun to judge books by their covers (and titles).  There are so many good books to read, I have to use some sort of criteria to sort through them. Had books I read been published differently, would I have made different decisions? Most definitely. The novel Little Bee originally published under the title The Other Hand in the U.K. before it was published in the U.S. with the new title.  I might not have read it otherwise — the U.K. title holds no interest to me, and the cover is interesting, but not as compelling. A Reliable Wife was published with a different cover for the novel's paperback release.  After reading the book, I found I like the paperback cover, with the silhouette of a fashionable woman walking away from a train, more than the hardback cover.  However, I liked the hardback cover's snow and single cardinal for its artistic value. The Girl with the Dragon Tattoo was published in its original language and country under the title The Man
Post a Comment
Read more

Review: There Will Never Be Another You

I had seen Carolyn See 's name in the Washington Post book section almost as long as There Will Never Be Another You sat on my shelf, a recommendation from my friend Kathy.  I took my time approaching the book, but once I started, I couldn't stop. As the book opens, Edith's husband has died and the debris of his care covers their home.  She is alone, dragging bag after bag of medical and personal care items to the incinerator.  It's Los Angeles, it's a hot September morning and when she finally answers the ringing phone, her son Phil tells her to turn on the television because it will change her world.  Her life already has changed; what else could compete? Phil's life is about to change, as well.  The loss of his stepfather was a sad event, but he has experienced loss already as a young boy when his father died.  His life goes on in the UCLA Medical Center where he skates along the top of life.  Dermatology is a low-risk specialty with few surprises.  Phil
Post a Comment
Read more 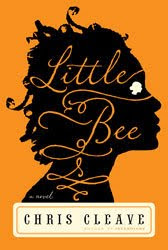 From the first chapter of Little Bee , I was hooked.  The writing was exquisite, the characters interesting, the story compelling and the plot unique. Like the book jacket itself states, I don't want to tell you too much about the book.  First of all, where would I begin?  Secondly, how could I stop?  While reading the book I tried to describe the story to my husband, David, and I know I was singularly unsuccessful. However, this is a review and those who read this deserve something for their troubles, so I'll try again. Little Bee has spent two years in an immigration facility in England, where she has learned impeccable English.  She is in England because of an encounter on a beach in her native Nigeria, and she brings with her only two items tossed aside on that beach, considered worthless to everyone but her. She is alone, but in remarkable company.  Her journey takes her places I could never imagine. I was most struck by Little Bee's observations and her prec
2 comments
Read more

More than half the year has passed, which gives us an opportunity to review our favorite reads of the year to date.  Here are mine, in no particular order. Shades of Grey — But you knew that.  If Jasper Fforde isn't on my fave list, check the backyard for pods.  Then chat up some Fforde ffans to console yourself at my demise (and to protect yourself against other Pod People, who cannot in any way be confused with Fforde ffans). Sweetness at the Bottom of the Pie — Lovely characters, interesting storyline.  Seldom do adults, let alone male adults, manage to create a good child.  Of the opposite sex, no less.  Rumor has it that this is the first of many, and I will be glad when the rumor is proven true. The Best of H.P. Lovecraft: Bloodcurdling Tales of Horror and the Macabre — H.P. Lovecraft rocks. Cthulu scares me.  'Nuff said. The Gates — I found John Connolly's writing  a treat before, but this book about opening the gates of Hell — and the young boy with a da
Post a Comment
Read more

Here: Read the Declaration of Independence!

By Chris - July 04, 2010
On Independence Day, I try to remind people how hard it was that the Founding Fathers did: declare independence from The Way Things Were Done Everywhere At The Time.  These courageous leaders did the right thing (in the opinion of modern-day Americans): they broke away from tyranny at any cost and were willing to pay whatever price if it failed. The document they signed was treasonous — which, for those of you who haven't read much about 18th century monarchy lately, could lead not just to death, but a really icky, painful, public execution.  Oh, in England, drawing and quartering was one contemporary punishment.  We use that phrase lightly today, but it was really, truly, and literally ripping a human being into quarters.  There was some messy entrails stuff, too, but the real crowd-pleaser was the splitting into four pieces. What preceded it would have been pretty gruesome, too, of course.  If you're going to make an example of someone, you don't want it over quickly.
2 comments
Read more I have no idea how Rebecca Skloot did it.  The subject of her book, The Immortal Life of Henrietta Lacks , was huge, complex and overwhelming.  With a tenacity one sees only in action hero movies, Skloot conquered it so we could understand.  More importantly, she helped us understand why we should care. The Immortal Life of Henrietta Lacks isn't just a story about some cells that wouldn't die, although that's at the center of the book.  Mostly, it is about the people around the cells. Henrietta Lacks was a young, black mother who had a very aggressive form of cervical cancer.  Despite treatment at Johns Hopkins Hospital, Henrietta died in 1951. What happened in this situation changed medical science forever: cells taken from her tumor were cultured by a scientist and, remarkably, did not die.  Instead, they lived, even thrived, earning the moniker "immortal."  The lab that originally grew the cells began sharing their booty so other scientists could use
Post a Comment
Read more
More posts