Well, for some of us, this winter hasn't really been all that "polar." For the rest of us: have you dug out yet?

No matter your frost level, there's still time to catch up on this year's Polar Book Club selection: The Bookman's Tale. I have been slowly savoring it, and it's coming along nicely.

If you haven't started it yet, maybe this description of Charlie Lovett's will tickle your fancy:

Hay-on-Wye, 1995. Peter Byerly isn’t sure what drew him into this particular bookshop. Nine months earlier, the death of his beloved wife, Amanda, had left him shattered. The young antiquarian bookseller relocated from North Carolina to the English countryside, hoping to rediscover the joy he once took in collecting and restoring rare books.

But upon opening an eighteenth-century study of Shakespeare forgeries, Peter is shocked when a portrait of Amanda tumbles out of its pages. Of course, it isn’t really her. The watercolor is clearly Victorian. Yet the resemblance is uncanny, and Peter becomes obsessed with learning the picture’s origins.

As he follows the trail back first to the Victorian era and then to Shakespeare’s time, Peter communes with Amanda’s spirit, learns the truth about his own past, and discovers a book that might definitively prove Shakespeare was, indeed, the author of all his plays. 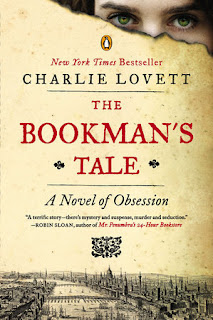 All you have to do to join the club is pick up the book and start reading!

Okay, two things: get the book (from the library, bookstore, thrift store with a book section — or share with a friend) and email me so we can coordinate our discussion.

Right now, the schedule is to finish the book by March 5, so the conversation can begin the following day. (Give yourself a chance to savor the book, give it some thought, maybe even re-read it.)

The conversation will be relaxed and friendly. We all are book lovers who read the same book, and we want to know what others thought of it.

However, the conversation is better when readers offer details and examples of why they hated something, or how a particular character development changed the whole tenor of the story. Or, you know, whether you think William Shakespeare was really another writer using a pseudonym. 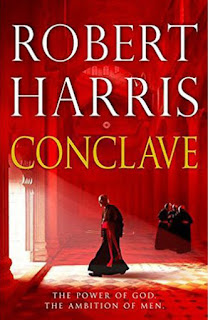 What a difference a few months make. Conclave was released in November 2016, before the political and cultural turmoil of the Trump presidency. I finished this book weeks into the tenure of the new U.S. President, and the politics of the Catholic Conclave struck me completely differently than they would have a scant month before.

Conclave sounded like such a great read: suspenseful, intriguing, and just fluff 'n trash enough to feed a craving. When I saw it on sale as I just happened to be strolling past the display, I thought it was kismet.

Imagine my surprise at finding myself bored early in the story.

A snap of excitement occurred as the story began with the death of the Pope (hopefully no spoiler alert was needed). Then author Robert Harris introduced so much expository information that was, frankly, tedious.

Harris takes readers inside the otherwise closed doors of this select society. Cardinal Jacopo Lomeli, Dean of the College of Cardinals, is riddled with guilt and susceptible to suspicion, and it is he whose tasks are conducted with mind-numbing detail.

To be fair, it's an accurate revelation of the tedium behind the beauty. The author faithfully shared details, facts, history, and trivia early in the book that, alas, dragged the momentum of the story to a crawl.While that may have been the point, I would have preferred a more balanced tapestry.

Thankfully, Harris softballed a few clues to reward faithful readers, starting with an unexpected range of international representation and a surprise contestant who slipped into the Conclave as the doors were closing to the world. (Well, almost closing: Lomeli stayed abreast of literally everything inside and outside of the Conclave, which seemed disingenuous to the spirit of the proceedings.)

The intrigue finally got intriguing as we met the international Conclave, the lead contenders of whom, in turn, revealed how they were less deserving than the next. These are the people with power in the Catholic Church: older, wealthy (mostly white) men with naked ambition they unsuccessfully concealed with faltering piety. Each had a sin ripe for exposure, and each was surprisingly similar to the rest (individual sensational sin aside). Each clique was power-hungry and clamoring for their seat at the right hand of the Father. No one was spared. Well, almost no one.

Only one character stood out, in the end: the perfect divergence from the parade of flawed men who all thought they deserved The Prize. That character, that antidote to Power, is the entire reason people should read this book.

The author completely lost me when he introduced the explosive ending that occurred outside the Conclave. Perhaps it was realistic, perhaps it was suitable for the world stage, but I am weary of what feels like the fallback position of every writer drawing "evil" with the same splotchy, faulty pen. Also, I was surprised the invisibility of women, except in certain circumstances, usually of servitude to the men — which may indicate more about the church than the author, but still struck me as antediluvian, even in context.

I cannot describe it with the same breathless praise of other critics whose reviews were published when the book was first published in November 2016. Perhaps that alone is praise enough: that the landscape in which I find myself is as merciless as the fictional world of power-hungry, flawed Catholic cardinals in Conclave.

Despite its flaws — maybe even because of them — I would recommend this book, if only to discuss it with other readers who may have a different perception than I.
Posted by Chris at 12:00 AM No comments: 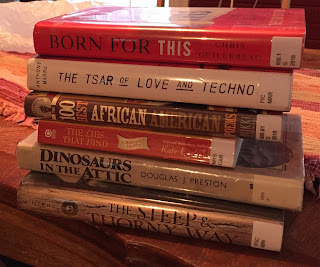 What does a reader do when all of her books on hold at the library come forth at once? Collect them, of course!

To be fair, not all of the books pictured (left) were from my hold list. One was a surprise: I wanted to read a short story collection, and My Friendly Neighborhood Librarian suggested The Tsar of Love and Techno, with a distinct Soviet feel.

The African American poetry collection was on a display at the middle of the library. (I usually steal from those displays, often from the Youth or Juvenile-themed ones, and always when there's a DK book on display.) I have been lax at posting poems, but I promise I shall be better as time goes on, and not just during National Poetry Month.

The Bibliophile Mystery has been in my hands three times now. I really enjoy the series, but this particular one just leaves me a bit cold. (However, I see a cat on the cover, so I may have to persevere.) I am loathe to read a series out of order, but I did manage to live after reading #7 when I was on a cookbook kick...

The Cat Winters book is one I want to want to read, but not as much as the other of her novels the library doesn't yet own — so I may have to return this one for the next reader. (Fun fact: she publishes both in the YA and Adult fiction categories, and I enjoy books in both, so go Cat!) 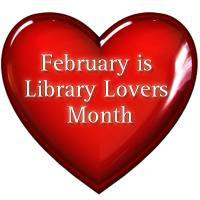 Finally, I can't remember if I read about Dinosaurs in the Attic from Brain Pickings or my dinosaur illustrator buddy on Twitter, but there it is. Written by Douglas Preston. How could I resist?

Career advice: that one definitely came from Brain Pickings. I think. Or Life Hacks. Either way, I'll gobble that up this weekend to help get my career wherever it's going.

Thank goodness it's a holiday weekend, or I may not get it all done.

What gems have you borrowed from your library? Do tell!
Posted by Chris at 10:00 AM No comments: