Showing posts from May, 2014
Show all

Without further ado, here's what my Reading Wish List for the summer, in no particular order: A Discovery of Witches trilogy Tobacco Road Wild The Amazing Adventures of Kavalier and Clay The Sixth Extinction Divergent trilogy Map of the Sky Peyton Place The Gods of Manhattan Golem and the Jinni Bellman and Black True Grit The Hangman's Daughter NOS4A2 And the Mountain Echoed Shadowfever The Goldfinch The Lowland 11/22/63 I am Malala Everything Changes Far From the Tree Dangerous Women 168 Hours in a Day The Decameron The Heptameron The Gun Seller The Weed that Strings the Hangman's Bag The Eye of Zoltar Lost Cat Bellman and Black The Fault in Our Stars Cloud Atlas The Mysterious Benedict Society A Penny Vincenzi novel The Family Fang Arcadia Crooked Letter, Crooked Letter Poisoner's Handbook Winter's Tale Oh, good heavens, that's an ambitious list of 44 books, and it doesn't include most of what has
Post a Comment
Read more

Summer Reading is Coming: Are You Ready?

Now is the time to start thinking about summer reading — and the Summer Reading Club! Oh, I'm sure you have been pondering your bookish possibilities, sorting the stacks in your head when you look at your shelves (or those in your local library). However, now it's time to get serious. Some books cry out to be read in the sunshine. Others are more subtle, encouraging you consider the possibilities. Some you've been saving for this very purpose. Maybe it's a trilogy that the author finally finished (or has announced the publication date of the final book in the series). You knew it would be in July, so you planned your Independence Day weekend accordingly. There's the one that is set in winter. You tried to start it last December, but the chill was too biting. Skip the parka, bask in the sun. Some books are safe only in the sunshine. (Yes, that one.) So, start stacking them up: we have less than a week before the frenzy begins. If you own th
Post a Comment
Read more

Translator’s Confession, 3 a.m. Dear C, I dropped your sentence in hot water. I talked to the boil. I said Here is my thumb for you to burn. Here is the soft heart of my hand and my arm and the nape of my wreck. I said vapor, just take me. I’m done burning with these pages. Being invisible doesn’t mean a person won’t blister, doesn’t mean the blisters won’t fill with pockets of water or when lanced the rawest flesh won’t emerge. First the word then the murky leak begins—what another mind may scrape against but never skin. By Idra Novey Courtesy poets.org About this Poem:  “I wrote this poem as a way to settle some unfinished business I had with Clarice Lispector, a Brazilian writer whose work I’d been reading intensely for nearly a decade and whose novel I’d recently translated. As is the nature of
Post a Comment
Read more

Grief Puppet   In the nearby plaza, musicians would often gather. The eternal flame was fueled by propane tank. An old man sold chive dumplings from a rolling cart, while another grilled skewers of paprika beef. Male turtledoves would puff their breasts, woo-ing, and for a few coins, we each bought an hour with the grief puppet. It had two eyes, enough teeth, a black tangle of something like hair or fur, a flexible spine that ran the length of your arm. Flick your wrist, and at the end of long rods it raised its hands as if conducting the weather. Tilt the other wrist, and it nodded. No effort was ever lost on its waiting face. It never needed a nap or was too hungry to think straight. You could have your conversation over and over, past dusk when old men doused their charcoal, into rising day when they warmed their skillets. The puppet only asked what we could answer. Some towns had
Post a Comment
Read more 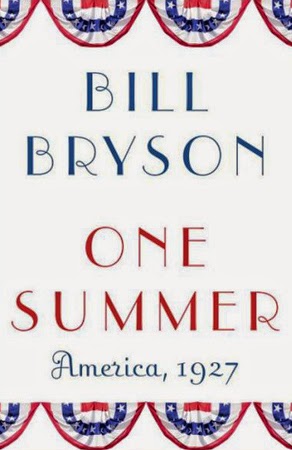 Bill Bryson is right. The summer of 1927 was an amazing year. in One Summer: America, 1927 ,  he convinces his readers in his usual engaging, fascinating and conversational way. Lindbergh? Check. Babe Ruth? Check. Clara Bow, Jack Dempsey, Sacco and Vanzetti? Check, check and double check. He has them all, plus storms and floods, Hoover and Coolidge, a few extra aviators, race relations, gangsters, Prohibition, Broadway musicals and Mount Rushmore. In no time, you're wishing you lived in 1927 (albeit the safer, wealthier lifestyle). (Hint: it wasn't as a baseball player.) Bryson does not skate across the top of his topics. He makes sure you understand clearly why aviation was in its heyday in the United States. He is clear about how Prohibition became, remained, then finally was defeated as law. He does it not only with the Roosevelts, Coolidges, Lindberghs and Capones, but also with the individuals with whom you may not be as familiar: Philo Farnsworth, Bill Tilden, Wi
Post a Comment
Read more
More posts