Notorious Success is Followed by — What? 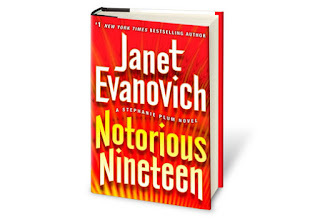 You know when you must read a particular type of book and you grab one like it, but it's not right? I went through that this week. It took a few books, but I persevered.

I wanted Fluff 'n Trash™— but a certain kind. I wanted Notorious Nineteen by Janet Evanovich. I wanted it bad. Alas, I didn't have it.

After stopping reading nearly everything on my nightstand, I took action: I went for Plum. I looked in two libraries and three thrift shops. I even went to Barnes and Noble. No Nineteen to be found. I was Stephanie Plum-less. I have two other Evanoviches of the Wicked kind, but I didn't want those. I wanted Stephanie.

I put my name on the "hold" list at the library for both the printed and e-versions of the book. I was somewhere around number 521 on the list of one or either. Seems this is a popular book. Who knew?

I could have ordered it on the Web, had it delivered to me. And yet... I didn't want to keep it. I have one copy of her books, a signed hardback of Smokin' Seventeen, that is in someone's hands  — I loaned it out, but can't remember to whom, if it's you, be kind and careful! — but, for the most part, I don't want to keep them. I don't want to own them. I want to read them and pass them on. They're my Library Book Book. Had the library not owned a copy, I'd have purchased one for the system. But they did. Multiple copies. Just none of them for me.

I had a while to wait, so I tried everything on my nightstand. Nothing stuck. (I mean, Wolf Hall? Definitely not the same thing, although Crooked Letter, Crooked Letter would have done the trick had I been in that mood. Same with Map of the Sky.)

I took to reading children's books, tasty little nuggets, as appetizers. (Neil Gaiman writes lovely children's books, did  you know? Delicious morsels, never treakly. Try The Dangerous Alphabet. Or Blueberry Girl — okay, that one is a little sentimental and sweet, but still good. Lesson learned: look to Neil Gaiman — always.) Then there was Penny Vincenzi's An Outrageous Affair, but it didn't stick. When has Penny Vincenzi not fulfilled that need? This was serious!

Then I stopped by the library to drop off a document for work (sometimes my job rocks!) and passed the "Hot Books" shelves. I thought to myself, "Self, what are the chances it's there?" My eyes skimmed the shelves until I saw the Evanovich Neon Orange. It was mine.

I devoured it in a couple of days. It's going back to the library today so the next reader can find it at the right moment.

Now we can return to the regularly programmed schedule of My Nightstand Collection. Take a look at my list at the left: which should I start next? I'm leaning toward Map of the Sky, but I may be able to be persuaded otherwise.) Give me your suggestions!
Blueberry Girl books Crooked Letter Fluff 'n Trash™ Map of the Sky Neil Gaiman Penny Vincenzi reading The Dangerous Alphabet Wolf Hall