Review: A Visit From the Goon Squad 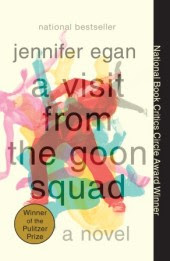 I have a poster about writing that reads: Make Me Care. And that was the thing missing in A Visit From the Goon Squad: for all of the story, the intricate plots, the interweaving of characters and storylines, I simply didn't care. (I also needed a cheat sheet, there were so many changing characters, especially Bennie's wives.)
Jennifer Egan's book was similar to another Pulitzer Prize-winner, Olive Kitteridge: a series of interconnected short stories — but I did not find it as enjoyable.

Egan gave us some interesting, even endearing, characters. And yet: I didn't care. Rob floated into the East River and I wasn't anxious about him. Dolly and Lulu wound up in the home of a crazy dictator and I didn't worry about them. Jules — what exactly was up with that dude? Benny, the Olive of this collection, was a mixed bag: likeable at times, but a weak intersection in this Venn diagram.

The story timeline begins, as best as I can tell, starting in the late 1970s, early 1980s, during the rise of punk music in Los Angeles. This group of angry youth are tangled together — and Egan keeps them connected, sometimes in tenuous ways.

The stories were not in chronological order, which didn't help me. I like a challenge, but I don't like confusion. I also found myself having to flip back to assorted stories to figure out who I was supposed to be reading about, and what their context was.

I also didn't like the leading portions of the stories that hearkened to what would happen in the future. So we knew that someone would live on in a different way — great, but so what? The time that was spent there was alien and forced: we lost resources, or someone changed them for technology, I couldn't tell. There was something about Manhattan's landscape I couldn't follow, and referring to devices that were akin to iPhones, but not.

Once the background for the title was introduced, I felt a little cheated: I had never heard of that before, and it was the cornerstone of the book.

I wouldn't recommend this book to anyone (nor the sequel tweeted last summer). A friend with excellent book recall who read it last summer couldn't remember anything about it now. That speaks volumes.

I'm curious — if you liked it, tell me: what did I miss?
A Visit from the Goon Squad Jennifer Egan Pulitzer