Review: The Witness House: Nazis and Holocaust Survivors Sharing a Villa during the Nuremberg Trials 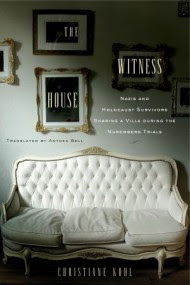 Imagine this premise: eyewitnesses reveal what happened in the villa where Nazis and their victims are housed together during the Nuremberg trials.

Would you want to know what happened, what they said to each other, how it felt to face each other, day after day?

Don't look for that kind of information in The Witness House.  Author Christiane Kohl manages to take an interesting premise and squeeze all of the life out of it.

This is the second book I have read that was originally written in German, and it fell equally flat. I hated The Reader, which so many other people enjoyed greatly.

Dozens of people stayed at Novalisstrasse, a boarding house on the outskirts of Nuremberg, in the years following the end of World War II.  The war trials began in 1945, and those who worked with the Third Reich were brought to court, hopefully to justice, by an international tribunal.  It was an interesting, brief glimpse into a country in the aftermath of a cataclysmic event that nearly destroyed it.

It was shocking to read about who all the Americans housed together, under the care of Countess Ingeborg Kálnoky, who is compared to Jean Harlow in appearances. How could any government, military or sane human being house the leader of the Gestapo with concentration camp survivors?  It was that question that initially drew me to the book.

However, the book read more like a "Who's Who" of the cool kids on the block than a fair view of all those who stayed under the inn's roof.  The book is as much about the countess and what held her interest as in the events themselves — and the countess was very interested in those who recently held power or influence in the Third Reich. One learned much about Hitler's personal photographer and the man whose name is synonymous with German air weaponry, but not as much about those who lived to bear witness to its unspeakable cruelty.

There is one fact that remains true: German documentation tells us more about those people than the disenfranchised, and this book is almost as much about the research that was conducted as the stories themselves.

In the end, I cannot recommend the book.  I would be curious if any readers found it more interesting than I, and I would very much like to know what held their interests.
Gestapo Messerschmitt Nazi The Witness House