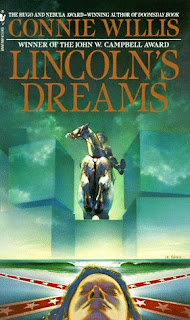 Days before Abraham Lincoln died, he dreamed he heard people crying in the White House. He asked a soldier what was the matter.  "The President has been killed," he said, and Lincoln saw a casket — and the resident had a black cloth across her/his face.

Days later, Lincoln himself was in a coffin in the White House, with a black cloth across his face.  Was it a premonition of his own assassination?  Connie Willis addresses that question — and more about dreams and the American Civil War — in her Nebula Award-winning novel, Lincoln's Dreams.

The question arises while a popular historical novelist is writing a book about Lincoln's dreams.  The novelist had just finished a book about brothers who fought in the Civil War,  and he turned his attention to his latest fascination: Lincoln's dreams and where Lincoln's son, Tad, was buried.  Actually, he set his assistant's attention to those questions.  Jeff (the aforementioned assistant) was dashing about Virginia, Maryland, the District of Columbia and Pennsylvania, gathering information for a last-minute assault on his "finished" novel.

Until he met Annie, Richard's patient and girlfriend.  She tells Jeff about her dreams — which, to the trained ear, are eerily similar to the wartime experiences of Confederate General Robert E. Lee.  Is she dreaming the experiences of Lee, who notoriously went without sleep for days during his wartime campaigns?  Is he sending her information?  What does it have to do with Lincoln, his enemy?

Annie is the patient of Jeff's college roommate, a psychologist who runs a sleep institute, whom the novelist had contacted for information on Lincoln's dreams.  Annie accompanied him for that meeting, and Jeff's world is never the same.

I am a huge fan of Connie Willis' writing, and there was plenty I liked — information about dreaming, the Civil War, Lincoln and Lee, the glimpse into the writer's world.  However, this book didn't quite work for me.  I never understood exactly what was happening, and always felt a little lost.  What clues were Annie and Jeff giving me that I just couldn't catch?  What created the immediate connection that everyone seemed to have to this dreaming woman?

I liked the information about dreaming, the Civil War, Lincoln and Lee.  I liked the glimpse into the writer's world (galleys, reviews, printers, etc.).  However, I have liked some of her other books better.  I might try a few of her other novels to see if it's simply my expectations rather than her.  I'll let you know.
Connie Willis fantasy Lincoln's Dreams science fiction