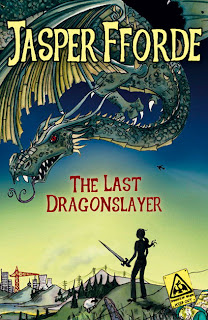 Jasper Fforde creates new worlds in a rather matter-of-fact way.  His England either has color castes, living literature, cloned dodos or dragons on the best real estate.  In The Last Dragonslayer, it is the latter.

Jennifer Strange is in a bit of a pickle.  Her claravoyant has predicted that she will kill the last dragon in the kingdom.  It's unlikely that the impoverished orphan, indentured to Kazam by the Blessed Lady of the Lobster, will do more than keep their doors open for as long as the magic lasts.  Only with a strange surge, a new assistant, a persistent king, this young woman with fiercely loyal Quarkbeast may have no choice.

The Welsh writer will not disappoint with his first young adult novel. Readers outside the UK may have to rely on their British sources for their copies (thanks, Jo!), or purchase a copy from someone on the Internet.  (I haven't found it in U.S. bookstores.) Maybe some gentle nudging (no bricks!) will encourage Houton Mifflin to publish the book on this side of the pond, as was reported by the author in December 2010.

Readers should download the app right away — well, if you're a UK customer... Does anyone else notice a trend?  No Fforde, no peace!  Well, let's see how the movement matures.  In the meantime, find a copy and enjoy a little Fforde.

Jennifer is a rare creature, embattled but not embittered, trusting just enough to know only few are trustworthy.  She does as she is told, but does the right thing, no matter what she is told. Her world is one to be recognized only through a refracting lens: some of it looks familiar, but just enough hearkens to another time and place.

Find out how young Jennifer takes control of her life and the future of her country, and how everyone fares.  It's one of Fforde's best reads yet.
Jasper Fforde The Last Dragonslayer