Review: The Best of Times 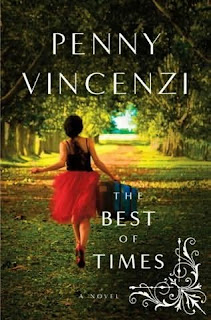 When indulging in a Penny Vincenzi novel, readers know they are in for a treat.

Each story, while unique in details, has a similar rhythm: first we meet people who are terribly rich and privileged as only a rich English person can be, but still remain hardworking and decent enough.  Then an unexpected, unspeakable tragedy occurs that changes everyone's lives, and readers get to wade slowly through the lives of perfectly nice people overwrought with worry and indecision.  Then there is resolution, always for the better (but not always how one would expect).

Readers are completely at home in Vincenzi's latest, The Best of Times.  The tragedy is a multi-car pileup on one of London's busiest highways during rush hour one Saturday afternoon.  Readers meet the people whose lives will be touched by this accident: a woman meeting the love of her life with whom she parted during World War II; a groom and his best man learning much about each other on the eve of a wedding; a husband ending an affair with a live-wire sexy woman; an up-and-coming actress thumbing a ride from a lorry driver; a farmer whose fields overlook the M4.

I cannot tell you what comes next.  Not only would it be cheating, but it would be impossible to do so.  There's a magic to Vincenzi's stories, where the unimaginable actually is imaginable, where even the reader deep in the midst of a story is overwhelmed by that which is unfolding on the pages of her thick novels.  It's never "just" anything, and the tapestry she weaves is full of unexpected rich, knobby texture that rests cool on the reader.

Characters are recognizable, but certainly not pat or hackneyed.  She offers lovely dichotomies where the least sympathetic person can be the most heroic (or not), where liars are saints for all the right/wrong reasons.  Someone's always indescribably rich, someone's always desperately poor, and there's always true love lurking in the shadows.  And there's at least one or two reasons to cry.