Classifying the Classics, and Who to Trust

Recently, I read The Odyssey (technically, Claire Danes read it to me) and I was amazed at the crap Odysseus managed to get away with. He slept his way home, killed lots of people, wounded a god's child, made some dumb-ass mistakes, lost more crew than I could count — and still made it home to sex his wife and kill lots more men and women. It was a fascinating read, but I found myself asking the same rhetorical question: "Why is this a classic?" 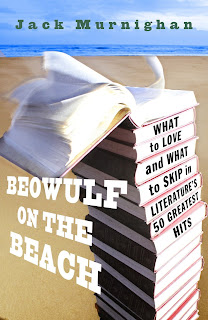 I have begun to look beyond my lit class must-reads for some great titles, like Tales of the Genji, the first novel ever written, by Murasaki Shikibu, an eleventh century Japanese noblewoman. Also left off my lit class lists was The Heptameron of Margaret, Queen of Navarre, a book inspired by The Decameron.

When I stumbled across the book Beowulf on the Beach: What to Love and What to Skip in Literature's 50 Greatest Hits, I was intrigued: what would Professor Murninghan include on his list?

He included a few chestnuts: The Illiad and The Odyssey, the Christian Bible (Old and New Testaments), The Aeneid, a few from Charles Dickens, a little Charlotte Brontë, a little Jane Austen.

The modern classics, though, is where he lost me. I have a hard time justifying Tropic of Cancer as a modern classic, notorious for its graphic sexual scenes (including what is now, nearly a century later, recognized as non-consensual sex). I couldn't grasp The Man Without Qualities, a book completely absent from every college lit class I took.

I was willing to agree to disagree with his classifications of "worthy" because it's his book — and I was glad he was much more inclusive as he neared the 20th century. I actually enjoyed his short description and a few tidbits, including: What to Skip, What's Sexy, Best Line, and What People Don't Know (But Should). I was zooming along, agreeing and disagreeing, nodding and shrugging... until I came to Vladimir Nabokov's Lolita.

I have been trying to sidle up to that novel for a few years. I have it in print and in Audible (read by Jeremy Irons, as if that would help). I kept telling myself I need to read it so I understand how the sexualization of a 12-year-old girl by her stepfather is literature. However, after reading "what's sexy" in the book and feeling literally ill, I will stop forcing myself to read this "classic."

In the end, I may never understand the literary significance of James Joyce's Ulysses, and I doubt I'll ever delve into Herman Melville's huge Moby-Dick. However, I will truly never understand why books notorious for their sexual taboo-breaking get a spot in the canon for that fact alone — especially when the tome glorifies non-consensual sex or the sexualization of a child — no matter how "good" the writing.

There are great classics in the world waiting to be read, and I will seek them beyond the Twentieth Century Canon. Please share your suggestions in the comments below and help me discover more classic books that deserve to be read.
Beowulf on the Beach: What to Love and What to Skip in Literature's 50 Greatest Hits classics Illiad Jack Murninghan Lolita Odyssey Tale of the Genji Tropic of Cancer