So, the Polar Book Club book took me a little longer to read than I anticipated — but I have finished The Lemoncholy Life of Annie Aster by Scott Wilbanks.

Intrepid Reader Karen suggested the book for our Polar Book Club because it sounded amazing: a young woman in San Francisco wakes up one day to discover a 19th century Kansas wheat field in her backyard, along with a letterbox that contains a letter addressed to her — from the year 1890.

The wheat field appears soon after Annie takes delivery of an old red wooden door purchased from a local antique shop. After a little digging, she discovers the door was once owned by the magician David Abbott, who was killed only days before it was sold at auction more than a century before. Her new "neighbor" Elsbeth dated her letter only days before the magician's murder. Can the crime be prevented and a life saved? 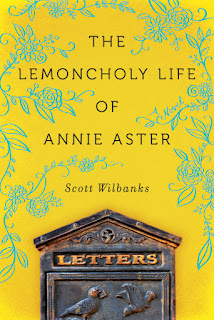 From the beginning, I wasn't sure what to make of the characters: Annie, a recently orphaned, terminally ill woman who speaks, dresses, and acts like a 19th century woman; Christian, her contemporary who survived a terrible accident and lives with the horror every moment of every day; Elsbeth, a widowed, retired schoolteacher who doesn't suffer fools and is all-business about everything in life; and Edmond, a gardener and friend of Christian's who is the key to this mystery — or is he?

Throw in David, an other-worldly magician doing the impossible with an ordinary-looking door; the good-natured but wary street urchin Cap'n who leads a perfectly oiled team of hungry, homeless kids; and truly evil, remorseless henchmen — and you have the motley crew who make up the story.

The book's characters seemed to embrace the outlandish premise too quickly. What would a time traveler need to do to convince you of their story? Would you travel across the country at the drop of a hat upon request and receipt of a pre-dated news article? What would you do for a virtual stranger: risk your life, your health, your future — or your present?

The book started a little slow for my taste, then began throwing in one bizarre vision, connection, and coincidence after another. In the end, it amounted to one too many coincidences, misjudged pop culture references, an implausibly violent scene in a rather soft-edged story, and an improbable ending that tidied up every conceivable loose end. However, I'd still consider it a three-star read: it is good time travel, and it presents an interesting premise, and a pretty intense ride full of surprises and familiar themes.