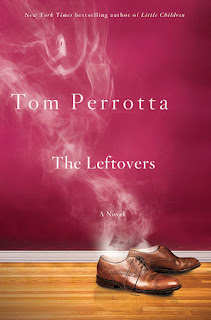 In the past year or so, there have been multiple reports of the coming Rapture, where God in Heaven will collect His righteous to his bosom, leaving behind the unworthy. For the True Believer, it is Gospel, literally: God will call home his chosen.

How would our lives, our beliefs, change if the chosen are not who we expect?

The prologue of Tom Perrotta's new novel, The Leftovers, sets up his story: one day, in the middle of October, millions of people disappear without a trace. Millions. Vanish instantly: one moment you're watching television on the couch with your wife, then in a blink of the eye it's just you.

Your promiscuous sister, your cruel mother, the Hindu librarian — all gone. However, your minister is still here.  Ditto the Pope (and many other religious leaders of note). In short, many people who "deserve" to be gone are wandering around asking the same question: What the...?

The Leftovers takes a secular look at the aftermath of this event from the perspective of residents of a small Midwestern town. The story takes place a couple of years after what people are calling the Sudden Departure, so the public has had time to re-start their lives, such as they are. However, Perrotta doesn't leave us in the dark: he fill in the details of the time between, catching us up just enough to where the present makes sense in context.

One of the elements I liked about the novel was the ambiguity. Unlike some novels with the Omnipotent Narrator who offers a deep understanding of the situation, we know only what the characters know. No one can speak with authority: was it the Christian Rapture?  One book series answers that with great authority (and I stopped reading after one of the characters lamented that her women's health services office didn't have any abortions to perform). This one doesn't have answers, which empowers readers.

The story is only as strong as its weakest character, and readers find no weakness in those created from Perrotta's mind.  There's the mayor, trying to keep the town together while his family slowly unravels. There's the woman renown for being the only "survivor." The local preacher isn't the man he used to be, and his newsletter proves it time and again.  Crime touches this fragile town, but only the Guilty Remnants, a self-appointed group of silent smokers whose role is to remind. Then there's Holy Wayne, who simply seeks to heal — and, of course, things never remain simple.

Tom Perrotta's novels end, but the stories don't. I mean, there is resolution, but only just enough. I always get the feeling that Perrotta's characters are continuing the story even after I turn the last page, and I like that.

I recommend this book, and I hope it stimulates some interesting conversations.