A Desk, A Home, A Place to Write

By Chris - May 18, 2012
I was a graduate student, just moved cross-country with second-hand furniture and plank-and-cinderblock bookshelves. I knew that as my studies grew, so would my book collection (and my bookshelves). I managed to get a "den," a few bookshelves from Ikea — but I was stumped about a desk.

Then I read about someone who grabbed a nice, thick board, stained and shellacked the heck out of it and attached it to two filing cabinets. I was intrigued: I could make a desk as big as I wanted.

Computers were new at the time, so I needed something big. (Well, bigger than what I had used for my typewriter.) I also had a cat who liked to sit between me and whatever I was working on, so it had to be wide. (Mao, God love her, was wide. Furry. Think Maine Coon, but a moggy.)

The board was beautiful, rich reds and browns under enough shellac that you could cut vegetables on it and not a mark would appear. Between the bolts on the filing cabinets and the walls, that desk was going nowhere.

But I was — after graduation, I purchased a townhouse. A new one. Brand spankin' new, with pristine white walls. I could not drill a desk to those walls (well, and not faint). My dad bought me the biggest desk on the market, with a four-foot flat-top retractable shelf and a place for my computer tower, keyboard, thick monitor and lots and lots of disk storage.

I didn't want to part with my beautiful board, so I leaned it up against the wall in the guest closet, behind the door, and waited.

A decade and a half later, the desk was given a new home. As computers evolved into laptops and the space of the room in which it had sat for 16 years needed to be "sold" to a fickle home-buying market, it was deemed "too big." It had served me well, but now it needed to belong to someone else.

Fast-forward a year: as packers emptied the storage units that held my family's belongings for the better part of a year, one of them struggled out with a huge board swathed in bubble wrap.

A trip to Home Depot provided a set of table legs and, after only one incident involving cat paws and dark brown stain, the new-old desk sat in the middle of my dream library, with my comfy chair tucked under the window.

It's a work in progress — lighting, pencil holders, where to put supplies and how to position power cords so I don't kill myself, whether the legs are too dark — but for now, I have the desk that saw me through grad school and waited patiently for me to return to continue writing on it. We're both home. 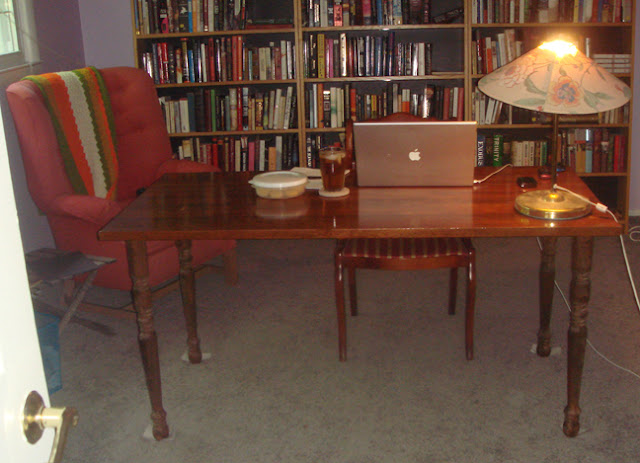