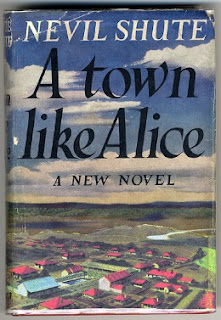 A Town Like Alice is a classic, well-received when it was published in 1950. Neville Shute created a one-of-a-kind novel that spanned decades and continents.

Which it did — just not as I had expected. It is a product of its time, and while parts of it transcend time, others are stuck firmly in it.

A Town Like Alice begins in the early years of the twentieth century. The elderly Scotsman Mr. Mcfadden asks his solicitor to help him execute his last will and testament to give his money and possessions to his only living relatives upon his death: first, to his married sister; then, if she pre-deceases him, his nephew upon his majority at 21 — and, if fate is unkind, his niece, whose legacy will be tended by the solicitors until she turns 35 (because young, unmarried women cannot manage that much money without protection from a solicitor or a husband).

Noel, the solicitor, thinks nothing of it again until after World War II, upon the death of the client. Noel must locate his next-of-kin — who, due to age and the global war, it turns out to be Jean Paget, his niece (and last in line for the uncle's fortune). The legacy is enough to allow her to live comfortably without working at a job, which Jean appreciates.

Her first decision: build a well in a small Malayan town.

She and her family had lived in Malaya for most of Jean's formative years and all had become fluent in the native language and culture. Jean and her brother had returned to Malaya before the war, and neither were unscarred when the Japanese invaded and occupied the island. Jean was among a group of British women who were taken prisoner by the Japanese and forced to walk to their camp — which never materialized, so they walked between prison camps all over the country for more than a year. During this time, Jean met an Australian prisoner who risked everything to take care of her and her kinswomen (and the children who walked with them). When the Australian is caught in his thievery, Jean's last image of him haunts her for years, and makes her reluctant to speak of her experiences as a prisoner. However, she and her fellow prisoners soon found a home: a small village where they farmed until the war was over and they were released.  It was in this village Jean intended to build the well.

Upon returning to the village, she discovers one can go home again — especially if it's the home of the heart. The East calls her, and she follows that call.

The book has three sections: during the War, after the War, and what happens after Jean constructs "a gift by women, for women."

Frankly, the book seemed tedious in some places. Shute was an aeronautical engineer who is in love with detail, and every detail is affectionately reviewed in minutiae. I can only handle Jean "filing away information" for future use a few times before I wish to remind the author that her noticing it is enough for readers to get the hint that it's an important detail.  It's worth it in the end, but it's not always easy to remember that.

Secondly, the book is a product of its time. The racial slurs are used casually and the sexism is blatant. Jean's brother would have received unfettered control of the principle by the time he was 21, but Jean has to wait until she's 35 because she's a woman? Please. The fact that the women POWs were able to come up with a solution where the men could not is understated, and the irony that a woman who can affect that much change and still not be in charge of her own legacy is absurd. Also understated is the fact that the most "developed" towns are the ones that kill more women than the less-developed and spoiled. The references to the primitive nature of the native dwellers was insulting. Don't even start me on the racism of the Australian Outback of the 1940s (which continues to this day), even if it's expressed a little differently than looking into their seamed, dark skin and making sure they have their own ice cream parlor.

You know, maybe the "understated" parts of the story just didn't warrant the same attention for the author as the "better" stuff. He highlighted the things he knew or that fascinated him, so I will have to guess that smart women and indigenous people didn't.

In the end, it was a fantastic snapshot of life in the early part of the last century. I was surprised that the afterward noted  the storyline of the English women marching around Malaya was fiction — because it was Dutch women in Sumatra who suffered that terrible fate, and the author took the story from a woman who survived it. The language and characters seemed authentic and the story was rather empowering for women, in the end, I think. Plus, the character of Noel was sweet and charming in his own way.

Speaking of characters: if Jean started one more successful business, I was going to choke her. But I liked her: very innovative and brave. Then again, if you lived through a POW camp in Asia, I bet starting your own shoe production company in the middle of the Australian Outback would be easy. And Joe: my heart just broke when he went to England looking for Jean and she wasn't there. Apparently Bryan Brown played him in a 1981 TV adaptation of the book, and I can see that.


I recommend the book, if you can see past its flaws. If you can't, stop reading immediately because they will continue to be insurmountable.

What did you think: outdated or a reminder of the strength of the human spirit?
A Town Like Alice Australia Malaya Neville Shute Outback racism sexism World War II