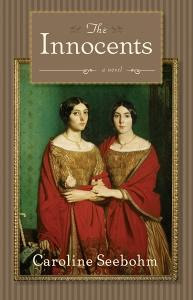 The Great War was a huge game-changer. Modern warfare changed the landscape, literally: many of the terms in our current lexicon are thanks to the war, which we have the great misfortune of knowing now was the "first" world war.

The Innocents goes a long way into making modern readers understand the horrors of this particular war.

Identical twins Iris and Dorthea had a difficult life. Their mother died at their birth, their father died during their childhood — so they were essentially "raised" by their (much) older brother in the opulent wealth of Eastern élite at the turn of the twentieth century. In his defense, he didn't really quite understand what it took to do that. Any mistakes were made out of ignorance, more so than intentional neglect.

Despite their privilege and opportunity, the women came to life when taking action during adversity. First, it was the Triangle Shirtwaist Factory fire of 1911, which was considered one of the worst disasters of New York City until the unfathomable horror that occurred early in the next century. Soon, their beloved France was deep in war, and America was poised on the brink. These women again wanted to make a difference, and the American Red Cross sent them to the French front to work as nurses. Never were they more focused than in the field hospital where, as les anges, they spoke quietly to the men who lived long enough to make it to their care, wiping fear and blood from soldiers' brows.

Even in the midst of war, they never totally escape their contemporaries, however, encountering acquaintances, not to mention at least one fighter pilot who could tell the difference between identical twins. In the madness of war, their lives were forever changed.

Author Caroline Seebohm's characters are recognizable, but not familiar. She may introduce the efficient hospital administrator, but there is no one quite like the efficient and calm Sister. Fighter pilots are never quite like Harry, a hero of Harvard's football field and hockey rink who took risks in the air much like he did on the ice.  Maurice starts out totally unassuming, but there's something about him that catches the attention of readers (and a certain identical twin). The rich, the vapid, the completely clueless Americans file past with names recognized in history and literature, adding credence to the twins' understanding of their life before the front.

Seebohm captures beautifully the horror and darkness of the Great War, the degradation of spirit as the days continue and the unimaginable unfolds before them. Each chapter has a date and location on it, so readers know where they are in history and watch the war — and life beyond the war — progress.

This is a worthy novel to join the genre that captures the loss of innocence the Great War brought about. Thanks to BBC dramas of this time period making their way across the pond, I hope more readers will seek Seebohm's bold and unflinching novel. It is worthy of their time.
American Red Cross fiction France Great War novel twins World War I