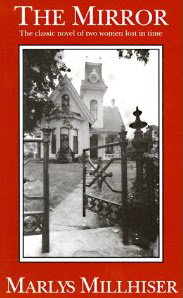 If you are a fan of time travel fiction, you must pick up The Mirror by Marlys Millhiser.  This novel features one of the most unique storylines I have encountered in a long time.

Readers meet Shay, a 20-year-old blonde living in Boulder, Col., on the eve of her wedding in 1978. Her parents would like to dissuade her from this decision, but she won't budge. As her grandmother enters her bedroom, she sees the young girl trying on her bridal veil and modeling it in front of an antique mirror. The family is shocked when Grandma Bran, mute for decades due to a stroke, cries out, "Corbin!" a and drops to the floor.

Shay doesn't have time to wonder: she herself also falls to the floor — only to awaken in what looks like the same room, but can't possibly be. The people are different, the furniture is different, she is different. The veil, however, is the same, and so is the mirror.

Shay has not just traveled in time, but wound up in the body of Grandma Bran on the eve of her wedding to Corbin Strock in 1900. She knows it's the mirror that caused this (and the evidence is fascinating and irrefutable), and she focuses on how to get back to her own time and body before her 20-year-old grandmother, Brandy, weds a man her family has never heard mentioned.

At first, I was impatient. The story seemed to remain too long with Shay as Brandy, and I wondered how the other time-traveler was doing at the same time. However, I decided to trust Millhiser, and I am glad I did. It was an amazing story, a time travel tale different than any other I had yet to read.

Imagine living in someone else's body, knowing what was going to happen — kind of. There is enough mystery in any life, no matter how well you think you know someone (especially your parents or grandparents). You might wish you had paid closer attention to family lore. You might wish these family members had revealed their secrets so you'd understand better the life you found yourself living.

There is danger and folly in knowing the future. Are you causing your family to live the life they were intended to live, or one you have created because it already happened? Worse, what if they don't listen? Even worse than that, what if they do listen and think you insane?

A person from the future living in the past may be confused, but at least she has an inkling as to what will happen next. How about the woman of 1900 suddenly thrust into the world of 1978, with disco, sexual revolution, sports cars, processed food and science? Add the fact that you're surrounded by "family" totally unknown to you who think you're mentally unstable, and you'll have Brandy's life in the body of her granddaughter (that harbors a surprise of its own).

The storyline was intriguing, unpredictable, entertaining, compelling and educational. Shay was confident that she knew what was on the horizon, but it's amazing how many times she was surprised by what happened in her life.

The characters were delightful. I worried about both Shay and Brandy, both out of their elements and in danger of being "helped" by those who loved them the most. Boulder was as much a character as Shay and Brandy — as was the insidious, manipulative mirror.

In the end, Millhiser's novel was brilliant, innovative and thought-provoking. (It also made me want to return to Colorado.) I am glad I trusted this author, and I strongly suggest readers give this book a chance. You'll be glad you did.
1900 Colorado fantasy Marlys Millhiser science fiction The Mirror time travel