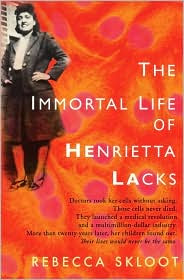 I have no idea how Rebecca Skloot did it.  The subject of her book, The Immortal Life of Henrietta Lacks, was huge, complex and overwhelming.  With a tenacity one sees only in action hero movies, Skloot conquered it so we could understand.  More importantly, she helped us understand why we should care.

The Immortal Life of Henrietta Lacks isn't just a story about some cells that wouldn't die, although that's at the center of the book.  Mostly, it is about the people around the cells.

Henrietta Lacks was a young, black mother who had a very aggressive form of cervical cancer.  Despite treatment at Johns Hopkins Hospital, Henrietta died in 1951.

What happened in this situation changed medical science forever: cells taken from her tumor were cultured by a scientist and, remarkably, did not die.  Instead, they lived, even thrived, earning the moniker "immortal."

The lab that originally grew the cells began sharing their booty so other scientists could use got a new tool for foiling many of the diseases and health issues humans face.  The immortal cells actually spawned the industry of growing and selling cells for medical use.

What complicates this situation is that no one in the Lacks family gave the doctors permission to take the cells, and the family was not notified that cells were taken and cultured.  In fact, the family was only contacted by scientists when they needed blood samples from Henrietta's family to help doctors with research and studies.

The second complication is that the industry that grew around the HeLa cells benefitted financially — while the family of the woman whose cells made this possible languished in poverty.

These are the bare facts.  What Skloot does with this information is what makes the book unique: she paints both the big and small picture of Henrietta and the effects of her cells.  It tells the story of the science and the family.  It dabbles in international history and politics and takes readers to the small town in which Henrietta was born and raised.

In this book, Skloot did the one thing science neglected to do: meet Henrietta and the people around her.  Readers meet Henrietta's family and friends.  Readers also find out about the science — and the scientists — behind the immortal cells.  As the book and story evolved, readers have a chance to change their minds and feelings about the situation.  There may be heroes and villains in the story, but Skloot lets readers make up their own minds about what title to assign to which characters.

Skloot worked on this book for a decade, researching it on her own time and money, gathering the information and facing dead ends and refusals of information.  I am grateful the author was so tenacious and brought readers such an amazing book, which I heartily recommend.
cells HeLa Henrietta Lacks Rebecca Skloot The Immortal Life of Henrietta Lacks tissue