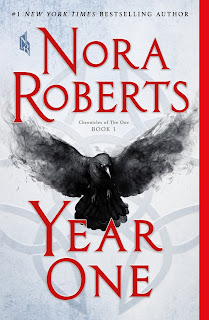 Nora Roberts is an unstoppable powerhouse. Not content with being successful in a single genre, the author has changed names and genres because she just has to write. A lot. I wished her well, but I didn't think she was up my alley.

Then I caught sight of Year One in the grocery store (of all places), the hulking crow swooping out at unsuspecting shoppers — and began my relationship with Nora Roberts, the Dystopian Novelist.

Year One takes place in current times. An unsuspecting wealthy New Yorker bags a bird on a hunting trip in Scotland and brings home more than he bargains for. As with all fatal diseases in modern tales, The Doom is highly contagious, shockingly swift, and ruthless: one mother dies from The Doom while her newborn does not. Good people go bad, or surrender to fear.

Survivors find themselves in a weird, dangerous, and polarized world that is a little Mad Max, a little Stephen King, and way too much Trump's America.

Year One chronicles the chaos and attempts at order through the eyes of a diverse but recognizable cast of characters, which includes a television journalist and the station intern, an empathetic paramedic and the smart emergency room doctor, a couple of Manhattanite Wiccans, a country dude and his mutt, a new mother whose father started the natural apocalypse, a basement-dwelling computer hacker — and a cast of forgettable but functional, er, dozens. (Did I mention The Doom is brutal?)

Roberts has a way of lulling readers into a false sense of security with the tedium of civilization. When people start bickering over Doritos, don't relax (but go ahead and judge, you know you want to). If you must, skim a paragraph or two, but brace yourself: it's that false sense of security that gets you, and them, every time.

Year One is solid gold, guilt-free Fluff 'n Trash™ by an international bestselling author. Let critics be critics, and you be the reader who paces herself so she doesn't have to wait too long between the next book and the finale (which, thank heavens, Roberts can't help but write quickly). Or, hell, go for it: Of Blood and Bone came out within two months of the first, and The Rise of Magicks will be out before Christmas this year. (You thought I was kidding when I said she wrote quickly!)

Reading is supposed to be fun — and this is a fun book to read.
book review Chronicles of The One dystopian Nora Roberts The Doom Year One