Review: Everything I Never Told You 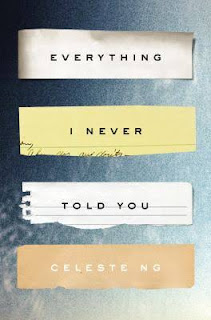 Everything I Never Told You by Celeste Ng is a quiet story, told in wisps, like smoke that too late reveals the raging inferno behind the closed door.

No one is quieter than Hannah, a member of the Lee family, each member of which is filled with unspoken words, unfulfilled dreams and unrequited longing.  Hannah may be the first witness revealed to readers, but this masterfully written story doesn't hinge on a single witness. Instead, Ng weaves effortlessly between each of the Lees, who, in turn and all at once, reveal nothing and everything, too often with a brief glance or deafening silence.

One morning, 16-year-old Lydia doesn't come down to breakfast. The only clue to Lydia's whereabouts lies with Hannah, who (like everything else) she keeps to herself. It takes a few days, but the Lees get their answer — and it changes their lives forever.

The story is told in fluid time: past mixes with present, smoothly transitioning between them, and allusions to the future are few and far between but still delicious nuggets that suggest that life goes on.

The intimacy readers have with the Lees is immediate, with a longing of its own. Readers long to know Lydia's whereabouts, they long to comfort those grieving — and they long to shake those who need to be awoken from their frightful slumber.

Ng does something that is, like the story, very subtle: she uses very little dialogue. Most of the characters express themselves through thought or memory, silenced by their own fears and apprehensions. The Lees don't talk to each other. They don't talk to other people. Do they have their own voices? Do they know how to use them?

Their lives are as small as their voices, their dreams as fragile as their silence. Can they dare to dream, to reach beyond what's been allotted to them by their small town, by its small minds?

The novel is set in the mid-20th century, which I'd like to think is a different time. I'd like to think we're more enlightened, more inclusive, less shocked by and less insulated from different cultures. I doubt current events would buoy my hopes. By seeing how things were, we can better see if how things are is how they really should be.

Part of my enjoyment is that I came to the story with little more than the dust jacket description, and the discovery of — well, everything — was rewarding. There is so much I want to say, but I don't want to reveal too much of its magic. It's an amazing read, and I recommend it highly.

Have you read it? What do you think? Let me know!
celeste ng chinese everything I never told you identity racial issues