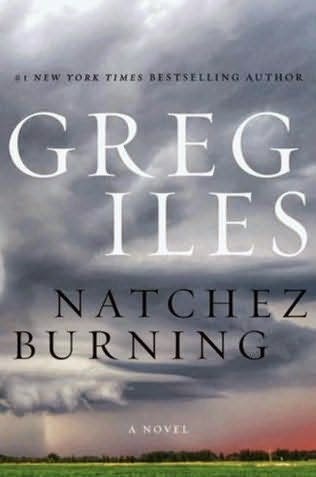 Full disclosure: I read only 571 of the 800 pages of Natchez Burning, and that was because the central story regarding long-unsolved civil rights crimes in Mississippi and the men who perpetrated them was really, really exciting.

However, I stopped reading long after I should have. I found Greg Iles' depiction of women in this novel sexist. Men were characters with purpose, whose actions defined them and whose purpose was clear. Not so for women.

In Natchez Burning, women are caricatures who smell like sex and whose actions are not honest or honorable. Women are described regularly with ample adjectives: beautiful, ambitious, desirable, wild, sexual or ruthless. Their actions need adjectives and adverbs, and they're reduced to hormones and a uterus.

At first, I thought it was the failure of the characters. I thought maybe that is just how Penn Cage saw them. Maybe Penn Cage was the sexist. Alas, I should have taken a clue when Albert needed to turn on a fan to get a woman's sex smell out of a room early in the book. Following that, Tom and Page both thought Viola smelled like sex, then Katie Royal was "never the same" after her wild encounters with Pookie. Then Mrs. Doctor Cage was the stand-by-your-man wife of 52 years with literal blind trust in her husband and seen only in relation to them. Then Pithy was the town gossip. The myriad of nurses were stalwart, but rather forgettable.

Then there was Caitlin, the beautiful, ambitious, ruthless and cruel newspaper publisher whose only thought was a story that could win her a second Pulitzer Prize. However, her sexuality was never far away: one of the first conversations between Penn and Caitlin involve Penn asking how late her period was, to distract her from wheedling information out of him. Thus I understood what I suspected would become a major plot complication.

Caitlin's male counterpart, Henry, is ambitious and working in near-obscurity to crack wide open a story steeped in civil rights struggles and murder. Henry's physical description is part of the story, but the narrative doesn't describe his "flashing green eyes," not once. Caitlin, however, has flashing green eyes — and, when she dashes out to a story, the narration notes that she doesn't have time to fix her hair or put on makeup. Her ambition, her wealth, her drive, her physical presence and feminine elements are described in great detail. Henry, however, simply does his job without mention of his need to shower, shave or primp.

I slowed down a little when Caitlin described how her life may change with the responsibilities of home and hearth. She reviewed the whole career-home dichotomy, which may have been fair. However, Penn the single father rarely worried about how his activities would affect his pre-teen daughter, Annie. Aside from a couple of inconveniences when his family or fiancée stepped in to help him with — well, anything, Annie was not a major concern.

Caitlin was ruthless almost to the point of twirling a virtual mustache. She shows more interested in whether Henry will be her employee to give her the story he's developed over the years than in his physical safety or health. Caitlin pumps her arms in glee that she has a story while Henry is in eminent danger. She has lived and worked in close proximity to the people and place of the news but shows interest only when it's big enough for her and shows interest in Henry only for what he can give her. Penn has built a relationship, but Caitlin has bought a story.

What made me close this book? The stupidest conversation I ever read between two ambitious, successful women.

Penn and Caitlin met Jordan and John for a major plot complication. The men marched off to talk business, and the women presumably did the same — only not. Penn and John mentioned the women only peripherally, and that was to confirm the wall between their professional and private roles. Jordan and Caitlin, however, began with griping about their men, which then devolved into "don't wait to make marriage and babies because life is too short." Really? Two women with three Pulitzer Prizes between them, one of whom had been in a war zone, who are knee-deep in solving a historic civil rights mystery (and possibly earning another Pulitzer each) aren't talking about the case, but over-sharing about their family lives.

I had to put it down.

I am very disappointed. I was sucked into an exciting story that had scope, pathos, historic resonance and relevance. What I got was a man who created female caricatures.

Let me know what you thought of the characters and the depiction of the sexes in Natchez Burning. I would love to be proven wrong, or maybe even over-sensitive. I'm a huge fan of Iles and I don't want to be disappointed.
Greg Iles Natchez Burning Penn Cage