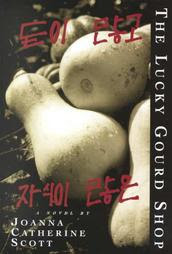 A woman discarded as a child, a man whose fury is stronger than his love, a mother who cannot raise her child out of the rage and societal restrictions of his time, the children who suffer: all this and more is found in The Lucky Gourd Shop by Joanna Catherine Scott.

To be honest, I would never have read this book if not for my book club. I nearly didn't get past the first few pages, but I am glad I did.  It was a tragedy, full of heartache and misadventures — what a tale. Charles Dickens has nothing on Scott.

The book opens with a mother telling her children what she discovered about their birth family in South Korea. Her teenage son, who was six when he left his birth parents' home, remembers a few things differently — and the story travels to Seoul, a generation earlier, and reveals the tale of their parents' lives (and, ultimately, their own).

Mi Sook had an unconventional — even shocking — upbringing. The coffee shop manager falls for Kun Soo, a man with an air of wealth and achievement, a man who can give her the home and life she never has had. Readers know he is not how he appears, and the life and family they build careens along a tumultuous path to the end.

No one escapes unscathed. The father who desires only sons is inflamed with rage and dissatisfaction, which he shares with everyone in his life. Kun Soo's mother (which is her name, incidentally, a traditional gesture in Korean culture) is trapped in the traditions that punish her and her family. Mi Sook is a victim of, and in, her own life.

The book reflects the rhythm and language of Korea, and are spare and insightful. Words are placed carefully and used only as needed. Scott appears intimately familiar with Korean culture, and I had to keep reminding myself that this author was not born and raised in this world she described.

The characters were true and interesting, but not always likeable. Everyone seemed wrapped in traditions and the restrictions that come along with them. Kun Soo was a man trained to value only sons. His mother has no name; she is referred to as "the old woman" or by how she relates to her family. Mi Sook's upbringing (or lack thereof) created an interesting dynamic between her and the people around her. Madame, the wedding dress maker who owned the shop next to Mi Sook's coffee shop, was the only person who seemed to see things outside the boundaries of tradition — perhaps because she was a woman outside tradition herself.

The children... Oh, my. After finishing the book, I turned to the opening chapter and re-read it.

This book will stay with readers. It's a difficult, but worthy, book. I recommend it, but cautiously: those who can get past the first two chapters will be able to follow it to the end with great reward.
adoption Joanna Catherine Scott Korea Mi Sook Seoul South Korea The Lucky Gourd Shop