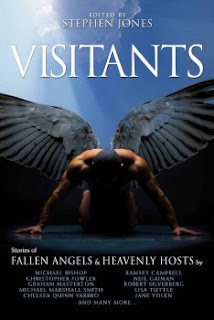 Before I picked up Visitants, a collection of short stories that involve angels, I would have ventured to say that the heavenly host are there for humanity's well-being.

You may not like every story in this collection, but you will never think of the heavenly host the same, ever.

I first became interested in this book because of Neil Gaiman: his is the first story in the collection. His tale, "Murder Mysteries," is personal and unreal at the same time, a character that makes the entire story immediate and plausible.

I felt brave, so I soldiered on.

From plagues to plays, from computers to curses, each author takes an interesting turn around the block with this subject. Each was interesting in its own right, and editor Stephen Jones arranges them in an interesting, attractive order. I have to admit, I was awash with a particular tide for a while, but as I read one or two stories a day, I wasn't too overwhelmed when a particular theme wove through too many in a row.

My favorites? Aside from Gaiman's story, I liked "An Infestation of Angels" and "Plague Angels." Both shared with me a perspective of angels I never imagined.

If you can read only one story (aside from Gaiman's), go for "Molly and the Angel."  Second choice: "Things I Didn't Know My Father Knew," which wasn't as much an angel story as — well, you'd have to read it to understand.