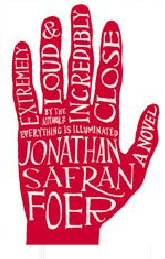 I am all about character, and Jonathan Safran Foer's novel, Extremely Loud and Incredibly Close, is full of them

Oskar is an exceptional young man. Possibly autistic (though never identified as such), he feels disconnected and is more than a little eccentric. He speaks French and carries a tambourine everywhere. He lives across the street from his grandmother, with whom he speaks via walkie-talkie and through notes on their respective windows.  He is somewhat bullied in school, but that doesn't seem to bother him much. He doesn't even bother marching: he is a different drum.

He is bereft and untethered to the world since the death of his father, a jeweler by trade, who had an appointment at the Windows on the World on September 11, 2001. The world is a different place now, two years later, where subways and tall buildings are unsafe, where his father's last conversation with him is pregnant with hidden meanings — and life is a mystery he has to unravel by himself.

When Oskar accidentally finds a key in his father's closet, he decides his mission in life is to find out what lock the key fits. He does so in a very methodical fashion, with attention to detail and a dogged determination that would exhaust the heartiest of adventurers.  He also keeps it secret from his mother — among the secrets Oskar keeps that nearly undoes him.

Oskar's story is one of three told in this book, the one all other stories revolve.  Two other voices speak: his grandparents.  Oskar's grandfather left the day he found out his wife was expecting a child, and he communicates through a series of letters to Tom, Oskar's father. Oskar's grandmother tells her side of the marriage relationship, and about That Terrible Day, through letters as well.

I enjoyed the resolution of Oskar's story. I was amazed at the people he met and how they reacted to him, the honesty and emotion he relentlessly (and guilelessly) extracted from them. However, I frankly didn't understand the relationship between the paternal grandparents, especially the grandfather. I appreciated his back-story, but his tale was disjointed and confusing.  Everything that touched that man was confusing and disjointed, including the grandmother.  I still don't understand the "tenant" storyline, either, though it was useful in the story's conclusion.  I could not tell you what happens to those two, and I am more bothered that I am not bothered enough by that than I am bothered by that. I found them interesting, but too confusing.

Oskar's mother was completely undeveloped, I found, and her story was told through the other characters — almost a dismissal of such an important character.

And yet... the writing of Oskar's story was exquisite and touching, emotionally connective despite the child's apparent lack of connectivity to the world around him.  I could cut out all of Grandma and Grandpa's stories and gobble up Oskar alone in this book.

I recommend this book cautiously.  It's definitely a library read: borrow a copy from a friend or the library.
9/11 Extremely Loud and Incredibly Close fiction Jonathan Safran Foer novel