Going Black Against SOPA and PIPA 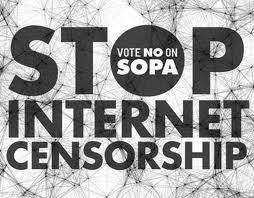 On Wednesday, January 18, I will join Wikipedia, Reddit and George Takei others by "going dark," or at least refrain from posting anything on the Web on my blogs.

I'll let Wikipedia do the talking:

The blackout is a protest against proposed legislation in the United States – the Stop Online Piracy Act (SOPA) in the U.S. House of Representatives, and the PROTECT IP Act (PIPA) in the U.S. Senate – that, if passed, would seriously damage the free and open Internet, including Wikipedia.

I am suspicious of government control of information, whether it's telling me what I can access or trying to get more than they should about me without going through the channels set up to protect my constitutional rights.

I am not keen on the PATRIOT Act.  President Obama's decision to extend it in 2011 is one of my greatest disappointments of his tenure in the White House. Our freedoms and rights are sacrosanct, and anyone who asks us to surrender them should be regarded with great suspicion.


So I'll see you on the other side.