Fall for the Book: Abraham Verghese, Cutting for Stone 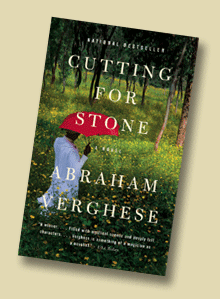 First of all, if you're in a book club, Abraham Verghese salutes you: it was you who made his debut novel a success.

"Book clubs made this book happen," he flatly stated during his appearance at the 2011 Fall for the Book Festival.  It was the widespread reading by those very book clubs that propelled Cutting for Stone onto the New York Times bestseller list, he freely admitted.

Myself, I know it was more than that.  Cutting for Stone is a thoughtful, sensitive, thought-provoking book — which started out as a glimmer of a story to an exhausted, nearly burned-out physician treating HAV/AIDS patients in a small town in Tennessee.

"All I knew is that there was a beautiful South Indian nun who gives birth to twins," he said.

He needed to take a break from his medical practice.  He had written two books already, both non-fiction, My Own Country and The Tennis Partner.  He had an idea for a story, and he wanted — no, needed to try his hand at fiction.

When his application to the Iowa Writers' Workshop was accepted, he found himself in the writing community he needed.  Once a week he spent time as a doctor with AIDS patients in a nearby hospital; the rest of the time, he was writing fiction, reading, recharging.

He admired Émile Zola, whose novels weren't "about" Paris, but "of Paris." He wanted to create "that atmosphere, that verisimilitude" in his novel.

His readers will agree: he succeeded.

The story spans the lives of two generations and takes place primarily in Addis Ababa.  First, there are the professionals who wind up at Missing hospital: doctors and nuns who administer more than just medicine and the people who help them provide this service. It's the shocking arrival of unexpected twins that sends everyone's lives into a direction other than they would have anticipated.

The characters in his novel are complex, interesting and surprisingly likeable.  Even the general whose actions affect Missing's obstetrician so profoundly is one to be respected.  When I asked Verghese if there were any characters he didn't like in his story, his response was immediate: "No.  If I hadn't liked them, I would have cut them."

His respect for fiction is unequivocal, so his foray into it makes sense.  "I have no patience for people who do not read fiction," he stated flatly.  "Uncle Tom's Cabin ended slavery."  Books speak to readers, he insisted.  "That's what is so magical about books: they speak to each of us differently."

Verghese's novel spoke to me of a rich life outside of the boundaries I know.  Cutting for Stone took an exotic "other" and turned it into a familiar location: of people, of situations, of life and love.

I am almost afraid to talk about it because I approached it without knowing anything about the story.  All I knew was that Verghese would be at the 2011 Fall for the Book Festival, and that my friend Pat found it one of the best books she had read in years.

What I will tell you instead is how books affected the author.  "I read Lolita when I was nine.  I read Lady Chatterley's Lover when I was ten.  When I came across a book titled Of Human Bondage when I was eleven," he paused as the audience laughed, "I discovered it was not at all what I anticipated."

And therein lies the magic.