Every year, the American Library Association reminds us that freedom is not free by holding Banned Books Week.  And every year, I get the same questions: What's the big deal?  Books aren't really banned, they're just challenged — and shouldn't I have the right to tell my kids what they can read?

I was among the more fortunate children: my parents didn't curtail my reading.  I showed my folks what I had checked out from the library; in the off-chance they weren't around or available when I got home, the books were stacked on my nightstand in my bedroom.  They were books, for heaven's sake, and everyone loves books, right?

That doesn't mean I didn't make my parents uncomfortable with what I read.  When I asked Dad about a phrase in Sonnets from the Portuguese that included the phrase "pregnant lips," he gravely suggested I was too young to read it — which translated to "Dad the engineer doesn't want to discuss poetical lips."  I was six, and I was learning to judge what was the best resources for research. 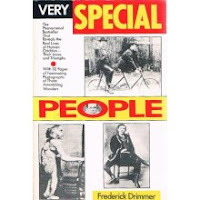 This understanding that some language was "hot" made the reading of Very Special People a little confusing a couple of years later.  One set of conjoined twins was described as having separate upper bodies but sharing a lower body.  I knew about lungs, intestines and anus, but penis?  Whether I had heard that word before (during Mom's "facts of life" discussions) was immaterial: I had never seen it written.  It seemed rather "lip"-y in nature, so I went straight to the dictionary.

Try reading the definition of any word when you haven't a clue as to what it is.

That definition included another word I couldn't understand, whose definition was equally puzzling, which led to another definition... I surrendered, extrapolating from the sentence enough information I needed to move on.

However, I did encounter a book I didn't understand — and when Mom saw it on my stack of library books, she wondered aloud if it was a little "old" for me.  I told her I didn't know, and we left it at that.  I found the first few pages tedious and terribly boring, so I returned it rather quickly.  The title? Helter Skelter. I was eleven.

In short, I read anything I wanted.  I read all of the exciting, titillating books girls my age were read, swapping amongst each other.  My friend Carole remembers the same list, her copies fat and swollen from repeated droppings in the pool, where she and her friends shared and read them.

Whether I should have read Audrey Rose, The Reincarnation of Peter Proud, Sybil, Go Ask Alice, Forever or Are You There, God? It's Me, Margaret isn't the real question.  (If it was, the answer is unequivocally "yes.")  The question is: who should have decided what I should read?

I always respect a parent's wishes regarding their children's exposure to books, music and movies.  However, they're not my parents.  They're not my kids' parents.  They have no right to tell anyone but their own children what they may consume.

Library funds are so limited, the broad array of books once found in the library already is dwindling.  Don't use that to control your own children's — and, inevitably, everyone else's children's — reading material.  Go with your family to the library, help them choose, and steer them away from books like And Tango Makes Three, The Perks of Being a Wallflower and The Earth, My Butt, and Other Big, Round Things. That is your perogative. 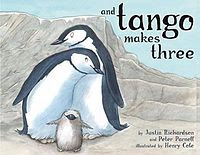 Just don't decide for me what those things are, and I won't do that for you.

Happy Banned Books Week, people.  Choose your reading materials, and read something that might or might not be objectionable.  Be your own judge.