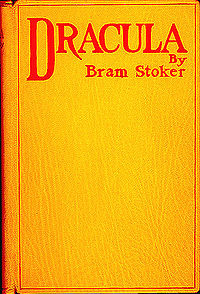 Bram Stoker rocks. He created the grandfather of all vampire books, Dracula, with little more than legend and ghost story. He assembled this information into a compelling story that, even more than a century  later, remains riveting.

By cracking a spine of this novel, readers re-introduce themselves to the ideas that were shocking, horrifying even, in 1897 when the Irishman released the book.  There was a time when we couldn't imagine a person without a reflection, or what could cause two small holes in a person's neck.

Stoker embraces modernity and tradition in the same tale.  Garlic and psychology, typewriters and voice recorders, blood-suckers and blood transfusions proceed lockstep through this ancient, modern tale.  Nowhere better is this dichotomy represented than in the character of Professor Abraham Van Helsing, a Dutch scholar who uses both modern weapons and ancient talismans to fight the unspeakable horror four men and two women must face before the tale is through.

The storyline remains compelling: Jonathan Harker, a lawyer from England, is hired by Count Dracula to come to his ancient, crumbling castle in Romania to assist the nobleman with his move to England.  Harker doesn't understand the customs of the land and finds the natives superstitious and backward, with their elaborate crucifixes and dark tales — but he politely accepts the former from a sympathetic (and surprisingly terrified) fellow traveler before meeting his client.  After days of traveling, Harker arrives late one night — and easily slips into the count's habit of working at night.  Dracula's only restriction: Harker cannot enter any of the castle's locked rooms.  Bizarre, true, but not as bizarre as what unfolds as he teaches Dracula about his soon-to-be adopted country.  Soon, all is lost, and Harker realizes his client is not what he appears to be.

In England, Harker's fiancée, Wilhemina, awaits his arrival with a growing unease.  Her companion, Lucy, begins suffering from debilitating anemia and dramatic sleepwalking after a ship arrives in the harbor, empty but for the ship's captain lashed to the wheel, dead, and a large dog that leaps ashore and vanishes into the woods.  Jonathan is found, barly alive and mad from brain fever, and Mina races to his side, marrying him bedside at the suggestion of the nuns tending to him.  Renfield, meanwhile, charts the count's growing strength as his "master" travels nearer.

Lucy's condition grows worse, and only the great Professor Van Helsing, called in by Lucy's fiancé (and former student) recognizes their enemy: nosferatu.  Lucy finally succumbs to her anemia, and Van Helsing must show her fiancé and friends what the night has wrought.  They must team up to end it, and quickly, with the help of all those who loved Lucy.

Victorian England, being what it was, offers an unexpected turn of events that will leave most modern readers baffled: the change in attitude toward one of the most trusted team members.  This storyline will appear confusing and antiquated to readers, but in context, it actually makes sense.  Still, readers will be tempted to yell at the characters in the book, warning them of the folly of their ways.  In the end, it is their weakness that is both their strength and their downfall, and as the story reaches its crescendo, even the most "sophisticated" reader will be frightened, breathless and in awe of a story told long ago but relevant and shocking even today.

Read it if you dare.