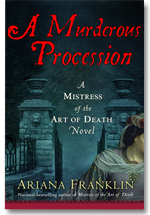 Adelia is back, and better than ever, in A Murderous Procession.

The undercover doctor is, again, doing a favor for that pesky Henry Plantagenet.  This time, however, she is escorting Henry's (and Eleanor's) daughter, Joanna, to Italy to marry a king. Henry, ever the scrupulous and cautious king, is going to get her there safe and sound, at any cost.

As the story opens, Adelia is having way too much fun in her life to want yet another adventure.  Allie is growing up, Mansur and Glytha are settled into domestic bliss, her practice in the quiet hamlet keeps her busy and rewarded.  Lady Emma Wolvercote and Pippy, her four-year-old son, are in the neighborhood.  Aside from Rowley being more available in these outlands, her life couldn't be better — even in the face of rugby in its oldest, purest and most violent form.

However, Henry won't accept refusal.  It is in Allie's best interest to learn how to be a lady, if she is to marry well — and who better a teacher than than Queen Eleanor herself?  It is decided: Allie and Glytha will remain with Eleanor until Adelia and "Doctor" Mansur return after a successful adventure.

As Adelia and Mansur join Rowley in the 10-year-old princess' entourage, they also take on a relic of great value, a few old friends — and a secret enemy once thought to have been defeated.  This person in the shadows wreaks havoc, all the time making people more suspicious of the two odd ducks in the entourage: the strong-willed woman and her Sarcean companion.

Again, Ariana Franklin paints a colorful portrait of life in the 12th century.  This time, however, readers get to travel farther afield with Adelia, meeting even more unique characters who introduce the intrepid reader to Cathars, small-scale war,  travel by sea, medicine vs. prayer and how "duty" transforms people to accomplish, and survive, the impossible.

Franklin also is expanding my admiration of English monarchs.  With each book, I fall a little more in love with Henry II, discovering my heart can extend beyond the Tudors (my personal favorite British monarchs).

Read this book, and admire the time gone by — and join me in anxiously awaiting the next book so this cliffhanger can be resolved.
A Murderous Procession Ariana Franklin England Henry II Mistress of the Art of Death monarchy Plantagenet