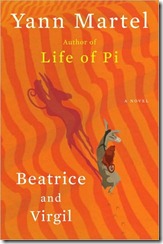 Did you ever have a day you are sorry you spent in a particular pursuit and wished you could get it back?  Thus was the case with Beatrice and Virgil by Yann Martel.

First of all, what in the world is it about: a fictional author with writer's block, a horrible play, a horrific playwright, taxidermy?  I think it may be the first, but maybe the last.  Still haven't quite figured that one out, sad to say.

Secondly, is this worthy of paper?  The answer is no.  There are no redeeming elements of the story.  I don't like the narrator, his wife, his music teacher, the taxidermist, the waiter.  I kind of like the veterinarian, but that's because he does what has to be done.

That brings me to the gross elements of the story.  Taxidermy isn't my favorite subject, but I stuck with the story because I loved Life of Pi.  It had to get better, right?

I waded through stories of rabid dogs killing cats, torture of a donkey, the slaughter of all of the animals in Eden and description of the flaying of a fox — for what? For the narrator to be brought to his knees quite by surprise by someone everyone else found creepy and dark, but seemed at the time to be acting out of character until the very end? I like surprises as much as the next person, but I didn't like this.  In fact, I dropped the book from my hands.  (Had it been my own copy and not the library's, I'd have heaved it across the room then recycled it.)

And that is just the perspective of a reader.  Now let's let the writer in me speak.


Edward Champion also took a shot at this book in an essay titled, "Why Yann Martel's Book Beatrice and Virgil is the Worst Book of the Decade."  He cites chapter and verse.  I just don't have the stomach for that kind of detail.

On the bright side, I found my least favorite book of the decade.