Review: The Tower, The Zoo, and The Tortoise 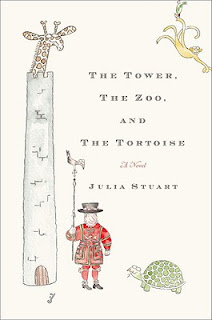 Imagine living in the Tower of London as a Beefeater, a member of the military who has overseen the Tower for centuries.  You'd think it would be exotic and exciting, wouldn't you?

So, I imagine, did Balthazar and Hebe.
However, what they got was much different than they expected.  (It always is.)
In The Tower, The Zoo, and The Tortoise, author Julia Stuart creates a unique world in which these two people live, with their hurt and anguish, their hopes and dreams — and a tortoise that saw the reign of Queen Victoria.
First of all, do not read the book jacket.  Don't remove it because the illustration is just fun and lovely to see every time you pick up the book.  However, resist the urge to see what the publisher wants you to see on the inside flaps: it will spoil some of the fun.
The best part of the novel isn't the story, which is absolutely incredible, intense, surprising and entertaining.  For me, it was spending time with Balthazar and Hebe — not to mention Amanda and Arthur, Septimus, Rudy and the bearded pig.  Oh, and the albatross.  Mrs. Cook was nice enough, and she certainly rounds out the story.  So much happens in this book, one doesn't know where to start.
Balthazar collects rain.  Septimus wants rats dead.  Ruby is the reason Monopoly was banned in the pub.  Spaniards can't all be trusted.  Pomegranate wood is rarely used, but quite beautiful.  Round walls are impossible to hang pictures on.  Moats keep things in, as well as out.  And tourists all secretly hope for blood and guts, no matter how pious they try to be.
In Stuart's world, that all makes sense.  She has the way of weaving a story that doesn't tell it all at once.  Readers must finish the book to discover what happened that fateful day, and it is not really what you expect.  Fact is woven into the fiction, so you're not really sure if the Dutch would — well, we might not have learned it had Amanda not by chance thought of herself while walking past the safe.
In the end, Mrs. Cook surprises you and you weep with the Joneses, while you secretly think the Ravenmaster is ravin' something.  You'll look up the history of Queen Anne's owl just as quickly as you would research Queen Anne.  You realize the story will unfold in tantalizing ways and you'll want to read it again just to relive the good parts — and you will realize it's all good.
and The Tortoise Julia Stuart The Tower The Zoo