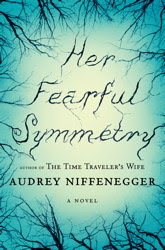 As the story opens, Elspeth dies, leaving behind Edie, a twin she hasn't seen in two decades, and Edie's children: Julia and Valentina, identical twins who actually are mirror images of each other.  Julia and Valentina are the main beneficiaries in Elspeth's will and can receive their inheritance when they turn 21 (which is months after the aunt's death).  However, for them to receive their inheritance, they must move to London and live in their aunt's flat for one year — and never let their parents step into the home.  After a year, they may do what they want with the flat, and the rest of the inheritance is theirs.

Elspeth also leaves behind a bereaved boyfriend, who was about a decade younger than his lover.  Robert is writing his dissertation about Highgate Cemetery, a Victorian cemetery with a rich history.  He purchased the flat below Elspeth when they first met, and they both lived in the building next to the cemetery (Robert on the ground floor, Elspeth on the second floor).

Martin lives on the third floor of the building.  As the book opens, the crossword puzzle setter and linguist is shocked as his wife Marjike leaves him to returns to Amsterdam, having spent many years living in the narrowing world of her obsessive-compulsive husband.  (Their son, Theo, is away at university.)  Technology permits him to lead a surprisingly secluded life, and he always has his friend Robert.

As the young women move into Elspeth's flat, they are haunted.  Elspeth is everywhere: in the furnishings, books, even the very dust of the home.  Having Robert one floor below adds to the all-Elspeth spirit of the flat.

Valentina is haunted by more than the memory of her aunt.  Her sister is the driving force in her life.  They are a "we" whose life is determined by Julia's actions and interests.  Valentina is starting to want more than just her sister.  She has interests Julia doesn't share, which is hard for this mirror-image woman to understand.  Readers get to see beyond that tether: the women are close, but they manage to go their separate ways from time to time — and each manages to create a world in which the other doesn't exist. Valentina's desire for a life creates a chasm into which she throws a bizarre solution — one she couldn't have considered in any other part of the world, in any other home, surrounded by any other cast of characters.

I liked the characters in this book, and the author helped me see their lives through their own eyes.  Wait, let me clarify: I didn't like the characters in a "Boy, I wish I was a mirror twin" and "I'm so glad I dust my furniture from time to time" kind of way.  Rather, the characters were fair to themselves, and it simultaneously broke my heart and pleased me.

The story was wholly unique and intriguing, making me wonder just how much of us is left behind when our lives end.  The resolution was understated, which left me feeling lost and abandoned — or maybe it was the story itself.

This is the time of year to pick up a book in which life and death are so closely intertwined.  Let me know if it was a satisfactory book, and maybe if you would have done the same had you been that character.

(By the way, after you have read the novel, check out the different covers on the different hardback editions.  Which cover did you have, and do you think it was the best?)
Audrey Niffenegger ghosts Her Fearful Symmetry