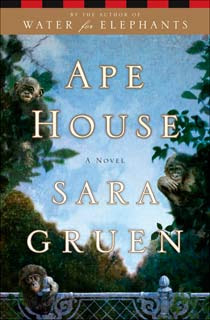 I should know that Sara Gruen is a big surprise, going places with her books I never would have guessed.  However, I was worried about Ape House: the publication was delayed multiple times (which I wouldn't have known had I not been keenly watching for it) (after Water for Elephants, can you blame me?) and the title didn't wow me.

Don't let that kind of foolishness — or any other, really — stop you from this book.

I consumed the book in almost a single gulp because it was that compelling.  (Plus, Carole had finished it two days before.)  It was bizarre, compelling and more than a little eerily foretelling.

The journalist John meets a group of bonobos (apes who are very similar to chimpanzees in appearance) and is mesmerized by them, as well as by their human caretaker, Isabel.  When tragedy strikes, he tries to find a way to use his journalism and his knowledge about the bonobos to not only help his career, but also benefit Isabel, and maybe even the six ape-friends he made in the ape sanctuary.

We don't spend all of our time in John's head, and Sara portrays each of her characters in a  fair, intriguing way.  Each of her narrators is trustworthy and engaging.  The story goes places I never would have expected; however, all I can say is: I have seen the future and it is bleak.  Maybe.

Don't read the book flap or any other part of the book jacket, if you can help it.  (Book jackets these days would tell you who Rosebud is, if you read 'em.)  Step into this book with wide-open arms and mind, and you will be rewarded with a book that will keep you thinking about it — and a lot of other concepts you might not otherwise have considered — long after you have lent your copy to friends.  (And you will.)  (Maybe you should buy two.)
Ape House Sara Gruen Water for Elephants