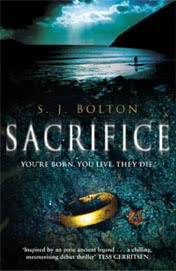 I am of two minds about Sacrifice.

One: what a wild story!

Two: I hate the narrator.

First, the first.  As with Blood Harvest, the other S.J. Bolton novel I reviewed, this is one convoluted story with lots of twists and turns.  I'm all about that.  I just always feel like I'm the last one at the party.  Now, part of this issue with Sacrifice I blame on the second issue — but more about that in a moment.

This is one rocking story.  Tora is a new obstetrician in Shetland, a small enclave in Scotland (yes, where those adorable little ponies originate).  She's originally from London, from a big raucous family, but moved to Shetland at the behest of her husband, Duncan, the only child of a quiet family with distant parents.  He relocated his business and purchased their house, and Tora transferred to a small but efficient and well-appointed hospital in town.

After six months, while digging her horse's grave, Tora finds a body in the peat: a woman who died within two weeks of giving birth.  Oh, and she had her heart cut out of her chest.  This all happened within the past three years, as best the medical examiner can tell.  Tora is consulted as the staff obstetrician, so she feels drawn into the case.  Her boss, conveniently tall and hunky, tells her to let it go.

That's her cue to help the lead detective, Dana, who finds herself thwarted at every turn.  The two of them find more resistance than they expect in this sleepy town, and it all looks suspicious.  Every clue and lead they encounter, together and separately, is explained away.

And that's where I learned to hate Tora.  She's supposed to be this bright doctor, but she accepts the wobbly stories of the men around her with little more than a puzzled look.  Even as the bodies mount and the evidence decries their flimsy excuses, she takes their word over her own eyes— even when her husband tells her an apparent lie about key evidence.

Tora's hunky boss admits to being able to control her and she still lets him prescribe her drugs.  Her father-in-law, the leading expert in a particular language, tells Dana she'll get more information from her over-the-counter library book than she will from him, and Dana agrees.  Police inspector Andy tells her a bizarre break-in with telling evidence at her house is just a "sick joke" and she should "just forget about it," so she sets about to do just that.

Tora even undermines and discredits the brilliant mind of her police officer friend because the men in her life disagree with Dana.  To Tora's credit, she eventually grows a spine and brain, but she has to do it over someone's dead body — though even at that, not even right away.

Bolton spends a lot of time introducing plot twists that have no basis in the story, but the story itself is compelling, so I'm willing to take that leap.  However, as with Blood Harvest, Sacrifice throws in surprises at the end with plot complications galore and a big reveal I literally didn't see coming.  Bolton's books make me feel like I missed an important memo everyone else received.

Sacrifice was an interesting story, so I don't really want to warn readers away from it.  Just be ready to leap.

Myself, I think I will take a break before I venture into Bolton territory again.  Maybe by then, I'll have gotten her Big Reveal Memo and won't be left skimming the book for missed clues.
Blood Harvest S.J. Bolton Sacrifice