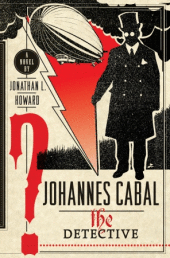 With so many of my beloved books in boxes in a storage unit two miles from home, I needed a friend.  Johannes Cabal did the trick — in Johannes Cabal the Detective, the second book of this deliciously wicked series by Jonathan L. Howard.

It is no secret that I loved the first book, Johannes Cabal the Necromancer.  First of all, who could resist the title? Second, the first chapter was riveting.

Howard does the same again, only differently, in this second Cabal.  Unlike other serials, this new installment introduces Cabal in a new light: a free man.  Of sorts.  When a man tries to steal a book never intended to see the light of day, he loses some freedom, especially in Mirkarvia.  However, not all is lost: the emperor is dead, and Cabal's special talents are needed.  Freedom for the temporary revival of a country's leader?  Seems like a fair deal.  Alas, not everyone is as honorable as Satan....

Thus begins Cabal's new situation in the midst of a European political struggle.  Having to fashion himself as a civil servant aboard a dirigible, he faces his nemesis and discovers there's more going on in government than pencil-pushing and a luxury cruise aboard the Princess Hortense.

Howard doesn't disappoint with the second installment of the necromancer's activities.  More importantly, readers have a chance to become better acquainted with this brilliant, creative necromancer.  Cabal's perspectives and asides are worth the price of the book alone (especially when picturing him in his first, albeit not last, precarious position that involved a stiff breeze and a robe).  And just when you thought you might have it all figured out, you discover you so don't.

Many books today come with afterwards that belabor the point, book club discussion points, author interviews and assorted other afterward chapters — and I have come to skip as many as I can get my hands on.  However, do not make that mistake with this book: if you think the story is over, keep reading.  In a word: fascinating.

Howard knows how to treat his readers.  He already has half of the next Cabal book under his belt — which I am champing at the bit to read it.

Read this book and laugh aloud time and again.  Then recommend it to a friend.
detective Johannes Cabal Jonathan L. Howard Necromancer