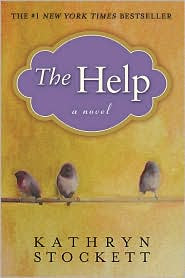 Mississippi of the early 1960s is beautifully, carefully and exquisitely wrought in The Help, the debut novel by Kathryn Stockett.  The book examines both sides of the issues facing blacks and whites in the American South on the cusp of the civil rights era.

The book is told in the voice of three different women: Skeeter, a twenty-something graduate of Ole Miss whose friends represent the Old South; Abileen, a maid in her 40s who raises the children of white women; and Minny, a spunky maid who is a fantastic cook, even if she doesn't know her "place."

Through Skeeter, we see what happens when a person of conscience wakes up to the reality of life in Jackson, Miss. for people with both black skin and white.  She isn't married or engaged, and she had the misfortune to graduate, rather than leave school for marriage.  She wants to be a writer, but the only job she can find is as a housecleaning "expert" in her local newspaper.  She knows things aren't right in her town, but she also realizes she is alone among her friends and family with these ideas.

Abileen may be a "maid," but she sees her goal as raising the children of the white families for whom she works.  She doesn't stay with a family for most of her career, as many maids do, because at a certain age, "her" children stop seeing her as a human being and see her as "other."  Her current charge, Mae Mobley, is in serious need of love and affection — and protection against a mother who is negligent at best and cruel at worst.

Minnie doesn't take guff from anyone.  She is sharp and sassy, speaks her mind and does what she knows to be right.  Her excellent cooking is her saving grace — though, perhaps with one job, it is her downfall.  Her latest employer, however, has her fit to be tied with strange requests, bizarre behavior and a sad, scathing secret.

While living in separate worlds only miles apart, these women find their worlds intersect in unexpected ways.  While working with Abileen on her weekly columns, Skeeter proposes to write a book about the maids of Jackson.  What maid would be crazy enough to reveal family secrets about the people who sign their paychecks, as measly as they may be?  The risk is greater than a paycheck for one person: family, friends, anyone close to the "offender" are at the mercy of the white women for whom they work.  They have seen it in action, and the risk is too great.  Or is it?

Stockett's narrators are true, honest and plausible characters.  She deftly weaves an intricate, compelling story.  I was constantly (and pleasantly) surprised by the unexpected twists and turns in the story and grew to really love (or hate) the characters I met through Stockett's pen.  I laughed, I cried, I cheered and wrung my hands.  I bought into the story and couldn't put down the novel I originally had eschewed because of my false high-minded skepticism.  The story stayed with me long after the final page was turned.

By the way, don't skip the "afterward" written by the author, which helps put the story into perspective.
civil Rights jackson Kathryn Stockett Mississippi The Help