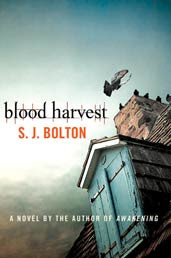 Blood Harvest is not a book I should have read.  In fact, I should eschew all books described as "crime drama" and "thriller" for the reasons I will put forth in this review.  However, I was in a book funk and Nancy Pearl made it sound rather intriguing, so I gave it a shot.

The premise of Blood Harvest is simple: boys living near a cemetery are being haunted. They see fleeting images of a young girl and hear voices that sounded suspiciously like their own, or those of their family and friends.

The church in town had been closed for a decade, after a  tragedy occurred on the flagstone of the nave.  Since then, tragedies befell the families of young girls of an age in this small, close-knit agrarian town steeped in tradition.  (The title of the book comes from one of those traditions, one not relished by a vegetarian.)

In walk the Fletchers, with an English father and American mother, already outsiders.  On their heels is Harry, the vicar sent to re-vitalize this community now ready to open their hearts and souls to their church.  Then there's Evi, a psychologist treating a woman whose family was torn apart by their tragedy.

Tom, the 10-year-old who compels the story, knows only one thing: something is tracking them, and that something is very interested in Millie.

The pace of the story was quick: once the action started, it didn't let up.  I was intrigued, and I could not put down the book.

However, I was sorely disappointed with the story's resolution.  First of all, I stopped watching television crime dramas like CSI and Medium because the victims were all the same: young women who were raped and murdered.  The popularity of Steig Larsson's books have proved the attraction of that brutality.  This book does not stray from that popular device: the brutality of innocents.

True, the entire book is set around crimes against children, so I shouldn't have been surprised.

Admittedly, the "big reveal" in the book was creepy and totally unexpected.  I do believe I emitted an audible gasp or two during that portion of the novel — but it was as much surprise and shock as horror.  The resolution tumbled out nicely packaged but with too few clues, so it made little sense in the fabric of the story.  Those who don't mind a curve ball out of left field won't find this as annoying as I did.

While the trip to the end was successful, it also was a crushing disappointment.  Many relationships are woven in this book, but one in particular was of great interest to me, and I felt betrayed on the final page of the novel as the tapestry was finished.  I didn't quite understand it, though I re-read the scene quite a few times, and it made no sense to me with the limited amount of information I was offered.

The book was suspenseful, interesting and rather creepy — all exactly as promised by the librarian who recommended it.
Blood Harvest S.J. Bolton suspense thriller