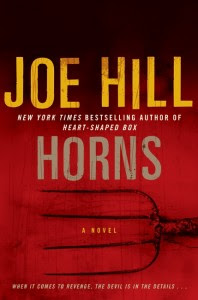 Joe Hill is a great writer whose work is full of surprises.  His novel Heart-Shaped Box led me to create a new bookish term: Reading Buddy (someone who reads a book with you; in the case of scary books, your Reading Buddy remains in the room — in person or by phone — while the book is read).

I expected the same thing with Horns.

It's not that kind of book.

Don't get me wrong: that is a good thing.  I don't think my imagination could take that kind of ride again so soon.

The story is compelling, heartwrenching, simple and yet terribly, terribly complex.  After a night of drinking that leaves a gaping hole in his memory, Iggy Parrish wakes up with horns growing out of his forehead.  It's not the first horror of his life.  He spent the last year mourning his love, Merrin, who was raped and killed — crimes for which Iggy was suspected, but never formally charged.  (If you wonder what's worse than going to jail for a crime you didn't commit, just ask Iggy.)  In fact, that's what he was doing the night before he woke up with his horns.

The horns come with a gift (of sorts): those who see him confess to their truest, deepest secrets or, maybe, sins.  He can wield power over them, those whom he encounters and those who seek his counsel (or permission).

Ig is not untouched.  He already has soured on love after the loss of his soulmate and a year of people thinking the worst of him.  Is he still the man Merrin loved, or has he become the kind of man who deserves the horns and everything that goes along with them?

Hill does not disappoint with this story.  There is a logical progression with the story, which becomes more bizarre with each page but makes complete sense within its boundaries.  However, I did not find it frightening.  Instead, I saw it as a psychological case study of power and fear, right and wrong, temptation and redemption.

I liked many of the characters in this story, especially Iggy.  Those who have read my reviews know, for me, the strength of a story hangs on its characters.  Hill is gifted in his character development.  No matter what happens — and often because of what does happen — the characters become more real and solid.

I really enjoyed the story, but I found the conclusion less than satisfactory.  A central mystery unfolds with the story, but the revelation feels anti-climactic and, because it it too well-kept a secret, it also feels irrelevant.  I did, however, appreciate and agree with the story's resolution.

I recommend this book, and you'll want to make sure to share it with your like-minded reader-friends.
Heart-Shaped Box Horns horror Joe Hill supernatural