Elizabeth Kostova always has something interesting lurking in her books.

They always begin very straightforward with an engaging premise: a girl encounters her father's letters, a psychiatrist has a silent, violent patient referred to him.  It's a nice hook, one you think you can see coming.

However, Kostova veers off the tried-and-true path into an undiscovered country.  After reading The Historian, I knew I'd follow her anywhere — and yet I was skeptical when I discovered the premise of The Swan Thieves.  Blame it on my inability to draw or paint, or maybe my intimidation of Art History (note the initial caps) — but I was not sure if it was my cup of tea.

What was I thinking? It was Elizabeth Kostova.  'Nuff said.

In her second novel, Kostova introduces us to Andrew Marlow, a psychiatrist and painter who has a sad, silent patient referred to him. The psychiatric patient, Robert, was arrested for trying to knife a painting at the National Gallery of Art.  During his stay at Goldengrove, a private hospital, Robert is quiet and obsessively paints a gorgeous, richly appointed, haunting woman and every day reads a packet of letters written in French.  The letter are among the keys to the man's salvation.  What do they mean?  And who is the woman he can't stop painting?

Robert's first day at Goldengrove is his most helpful and lucid to the good doctor.  The patient gives Dr. Marlow permission to speak to "anyone" in his life.  There aren't many: Robert is divorced from his wife and was not employed or otherwise occupied during his short time in D.C.  How can Dr. Marlow collect enough information to unravel the mystery that is his new, now-silent, patient?

Kostova's strength here is her characters.  I was not sure at first if I liked the solitary, quiet and very desperate Marlow.  He seemed lonely and pathetic, frankly.  Older, alone and not realizing he ached from the life he had not led, he was a hard character to appreciate in the beginning.  However, when he was with others, his genius and heart shone through and banished the old fuss-budget he appeared to be.

Robert becomes an intriguing character as his story, past and present, unfolded.  It was lovely, revealing both of the storyteller and the subject.  (It also made me wonder how my life would be told by the people who surround me, each holding a small segment, a tiny window into what is called "my" life.)

Woven through Robert's tale was another intriguing story told through letters: a woman in love, a painter, a life in Paris during a time where life and love was very restrictive, where people knew their place, where talent still couldn't hide.  I loved the woman of letters, too.

I have to admit, I was a little impatient with the story at first, wanting it to unfold more quickly than it did.  It wasn't until Marlow took a turn I didn't expect that the story took off, at least for me.  It was amazing and fun to discover there are depths to characters I think I know so well.

I still don't understand what makes an Impressionist an Impressionist.  I can't imagine the life of a painter, let alone any visual artist.  However, the book was amazing, intriguing, surprising and exciting, where a lovely story was tied in a bow of a completely unexpected ending.  I recommend it and I hope you will read it. 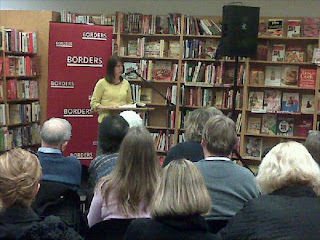