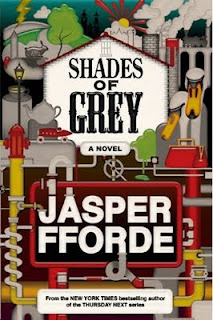 "I like to take a very improbable situation and make it real, " Jasper Fforde said recently, in way of introduction to Shades of Grey, his latest novel.  And truly, what can be more improbable than a word devoid of color?

Well, after listening to the author, it's not totally out of the realm of explanation.  "Visual color," he explained patiently, "doesn't exist.  It is a product of the mind alone.  When you see a spectacular sunset.... reserve part of the praise for yourself."

So he imagined a world half a millenia in the future that was very tightly structured in which human beings saw only one color — and that ability alone determined their role and position in the world.  It's a world very much like English boarding school, complete with the early bird getting the bacon and bullying on the cricket field.

"It's a bizarre world, but highly practical," he noted.  And based on his literary vision, I must agree.

Fforde is one of those rare authors whose work is consistently excellent.  I never have been disappointed by a book by Jasper Fforde, and this book is no exception.  While unusual and complex enough to catch me off guard at first, I persevered: Shades of Grey is written by a writer whom I trust implicitly, one I would follow into the most improbable story.

Eddie Russert lives in a very tightly structured society with his father, a physician whose medical practice consists of showing patients certain colors as a curative.  The government assigns people to the town, even homes, in which they live.  Eddie made the mistake of questioning authority by suggesting a more sensible way to queue for meals, and his punishment was to be exiled to Ease Carmine, a small town on the outer fringes of civilization.  His father was assigned to be the doctor of the same small town because their color doctor recently died.  Along the way, the Russerts miss their chance to see The Last Rabbit by a strange encounter at a paint store: a Grey pretends to be a Purple (almost at the cost of his own life).  Soon afterward, Eddie has an encounter with a very rude young woman with a rather retroussé nose.

Imagine Eddie's surprise when he encounters the spunky young woman again later in the day in his new town.  Only she wasn't on the same train, and there is no other way to travel that far that quickly — so he must mistaken, right?

The lowly Grey trying to pass himself off as a regal Purple and a disrespectful beauty are only the beginning.  There are homicidal Yellows, dishonest prefects, starcrossed Green lovers, a trip to an allegedly mold-infested town, a trip into the Night and more spoons than one could ever imagine in this utensil-starved society.

Eddie wants to keep his nose clean so he can earn enough points to return home and marry Constance Oxblood, a very old, influential family who can keep him in string for the rest of his days.  Constance isn't the best or even nicest person, but Eddie might test much higher in his red perception than even his father suspects, and such a marriage would be beneficial for the Oxbloods — and even more beneficial for Eddie's more modest family.

But that's before Jane has him digesting inside a yateveo tree, which is certain death (especially if one is upside down, as Eddie finds himself).

Confused?  I was.  It was a very foreign world to me, one that made me rely on the author's Web site more so than I had in the past.  I felt as though the characters were much like the troupe of blind people who take turns describing an elephant by what each could touch.  I was utterly lost until the wheelbarrow — then I felt like maybe I was just trying too hard.  When Carole told me she laughed at the description of the movie scene from Raiders of the Lost Ark, I started the book a second time, convinced I had missed something.  (It actually was a great idea because I did understand more from the beginning the second time around.)

Fforde said he wrote the book with enough ambiguity so each reader would have a unique experience.  Readers were invited to their own interpretation of the story.

The story takes place close enough to our present time to where our artifacts still are available, but distant enough to where there is no frame of reference for them. The description of the Oz characters was bizarre because it were offered by someone using his own current frame of reference, but it made  sense.  (It made me wonder exactly what these "modern" people looked like, with tiny pupils, ZIP codes tattooed on their collarbones and bar codes in their nail beds.)

It was the titles of books in the modest East Carmine library that made me laugh out loud; it was like playing the game Mad Gab.  Try speaking to someone with the same inflection and vocabulary used in 1510 and I suspect it would be a similar experience.  (A similar comparison to one Jasper uses in an interview, I must disclose.)


Shades of Grey is the first of a planned trilogy and I am anxious for the next installment.  In the meantime, we have another Thursday Next novel to enjoy later this year.

And if you haven't read anything by Jasper Fforde, go pick up The Eyre Affair immediately.  You can thank me later.
Jasper Fforde Shades of Grey