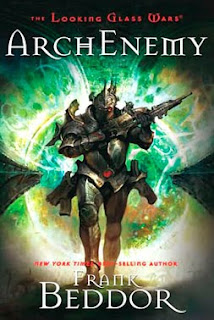 Wonderland is in trouble.  Homburg Molly has unwittingly assisted King Arch to disable Imagination throughout Wonderland — which wouldn't be so bad if it didn't also disable Queen Alyss' strengths.  The only comfort is that Redd is similarly disabled, so Alyss doesn't have to worry about that enemy.

Arch appears to be Alyss' enemy.  He also appears to have used Redd for all he thinks she's worth, and he's cast her aside (and not for the first time).  But is Arch working alone?

The caterpillar oracles are being maddeningly obtuse yet again — and breaking pretty much all tradition by speaking with those other than the ruling queen, including Molly, who receives the single smoke-formed word: "Y-O-U."  They know not only the future, but all possible futures, which would be baffling at best if they weren't hookah-smoking caterpillars.

Confused yet?  Don't be.  Frank Beddor starts in the middle of the action and never lets up.  He weaves a story as intricate and beautiful as the silk from the oracle caterpillars.  Each strand is clear and precise, easy to follow as part of the bigger picture.  (However, if I read one more reference to a "gwormmy-" anything, I was going to gwormmy someone.  A little Wonderlandish goes a long way.)

In this novel, relationships are very important.  Dodge has come to a conclusion about his life with Alyss, whom he has sworn to protect and can't help but love.  Can a member of the guard love the queen whose safety is his life and still do his job?

Hatter has lost a love but found a new one.  He cannot but protect Molly, and he chooses the most unlikely of places to keep her safe, with the most unlikely of protectors.  Together, they find another who can unlock the secrets even Molly can't understand — and may ultimately save not only Wonderland, but the worlds that benefit from its imagination-power.

Arch's relationship with the Heart Crystal is central to this book.  He sees it as the antithesis of his power: without imagination, Wonderland will need him.  The caterpillars, those obtuse, confusing oracles, give him clues that appear to be to his advantage and offer him the tools to achieve these goals.

Redd and Alyss are in the same boat, so to speak.  Robbed of their powers, they view each other differently.  Redd thinks she knows Alyss' powers, and Alyss knows she has not yet seen the depths of depravity and cruelty of her aunt.  However, when the playing field is even, will their antagonistic relationship remain as volatile as in the past?  Can they be equals, allies — even co-rulers?

The oracles have changed their relationships with the reigning royalty.  Have the oracles gone off their mushrooms, seduced by tarty-tarts and ready to sacrifice all to an entity known only to them?  What do they know about this entity, and what future are they steering Wonderland toward with almost reckless abandon?

All of this unfolds as the Usual Suspects line the opposing sides of the chessboard: Bibwit Harte, Vollwrath, Doppelgänger, Blister and a few other familiar faces.

In the end, it is a satisfying sequel to a unique, unequaled series.  Beddor calls the collection a trilogy, and I would be satisfied with this story to be completed with this book.  However, if he finds more story to reveal, I'll be first in line to see how he shuffles the deck.  Read the trilogy in its entirely, in the proper order, and enjoy.
Alice in Wonderland Alyss Charles Lutwidge Dodgson Frank Beddor Hatter Madigan Lewis Carroll Looking Glass Wars Seeing Redd