The Cover Story: Paperback vs. Hardback

By Chris - January 31, 2010
I love a hardback book, the heft and integrity.  They last longer, sort of.  They're also more expensive, as much as $30 retail.  (Talk about heft!)  If it's purchased early enough, it's a first edition that, if signed by the author, has some value beyond warm fuzzies to the owner.  I feel like I should respect the hardback.

Paperbacks, on the other hand, are books I carelessly toss in my purse or backpack.  I like the trade paperback, with its larger size and often artistic covers.  Usually, the trade paperback doesn't sport a movie tie-in or a Fabio-like hunk with a non-existent shirt, which also lends a sense of gravitas. 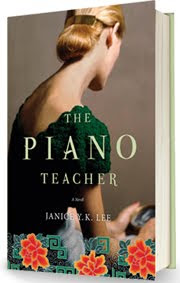 However, smart book marketers are playing for a new life in paperbacks.  The Piano Teacher by Janice Y.K. Lee received a decent response when released as a hardback last year.  However, when Penguin Books (USA) re-released it as a paperback, the publisher sold 151,000 copies in two months — more than three times as many as were sold in hardback ("First-time novelist Lee a paperback hit," AP News, January 21, 2010).

Credit is given to Penguin's dedication to promoting paperback editions of its hardback books, and other novels have fared well with this strategy.

Bookstores also follow suit, promoting many of these paperbacks; I've seen The Piano Teacher at the registers at My Borders, among other titles (City of Thieves, A Reliable Wife, to name but a couple).  These titles were "guaranteed" to be enjoyed "or your money back" and promoted as book club recommendations.  My friend Carole picked up City of Thieves in response to that very Borders guarantee, and it lived up to its expectations.  She asked the bookseller a couple of months later how the promotion went and was told there were no refunds given at that store for that title.


The Piano Teacher's paperback has the same cover as the hardback, which makes it easy to recognize by interested buyers who waited for the paperback edition to save money.

No word yet from Algonquin about the sales of A Reliable Wife, but if buzz at the bookstore is any indication, the new edition is intriguing plenty of people.  I have seen many people carrying the book around the store with their other purchases, or picking up a copy at the register and adding it to the pile of books and music they're purchasing.

So, when you see a book that intrigues you, do you wait for the paperback to come out rather than pick up the hardback?  Do you buy a book by its cover?
Angonquin Books Penguin Piano Teacher Reliable Wife