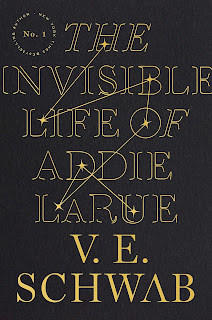 Full confession: I was intrigued by V.E. Schwab's novel The Invisible Life of Addie LaRue — both because of its premise and because of the rave reviews by other readers. When a fellow reader said they sobbed loudly at the neighborhood Starbucks as they finished the novel, and another said they wished they could read it again for the first time, I thought it was right up my alley.
I saved The Invisible Life of Addie LaRue to read on vacation, so I could savor the experience (and sob into my coffee, if needed).
Alas, there was no sobbing — just a bit of head-scratching.
Warning: spoilers ahead. Feel free to bookmark this review for future reading, if you want to finish the book first.
Okay....
If you're still here....
Let's get to it.
First of all: the relationship between Addie and Luc confused me. Luc was the enemy. A sexy enemy, sure, but an enemy nonetheless. He wanted to see Adeline break, but... his actions toward her signaled more than a dark god's fancy in a soul owed him. Addie also gave off mixed messages: she hated him, yet they were lovers. She accepted gifts and assistance from him, but pushed him away when it suited her. She obsessively gauged his mood by the shade of his green eyes. (I lost track of what each shade meant, no matter how much foreshadowing Schwab tied to it.)
The intriguing premise grew dull. Addie dabbled in the world she was so hungry for in her youth. She was in France to see Voltaire, and cross-dressed to experience real life. She was in Germany when Archduke Ferdinand's assassination launched the Great War. She sold her body when she had to, and loaned it out other times for a safe place to sleep. Her occasional trips back to her hometown felt cliché and provided unnecessary reminders that everything is forgotten in time. Somehow, she knew enough piano to write part of a song for a pop artist.
But she can influence artists intrigued by her seven perfect star-freckles. She met Voltaire, sort of. She watched Beethoven pay up to Luc.
Some parts worked. The art theme that tied up satisfactorily at the end, with the help of Bea, was nice — but I can't quite understand how she alone saw connections and the resolution of Henry's story. Other parts were more problematic: the writing was choppy and inconsistent, Schwab's characters were surprisingly forgettable — even the ones who were supposed to matter.
I never felt a sense of place in the story, and I found myself checking chapter titles to see where (and when) we were supposed to be. The lone exceptions were her trips to Vallons, and the sole reason for those seemed to be to hammer home the point that everyone disappears over time.
In the end, I was underwhelmed, and I donated it to my local Little Free Library. Perhaps there is a reader out there who needs it, and will feel Schwab's tale, more so than I did. I hope that is the case.
Did you love the book? What did I miss? Tell me; I truly would love to know.
The Invisible Life of Addie LaRue V. E. Schwab YA young adult fiction