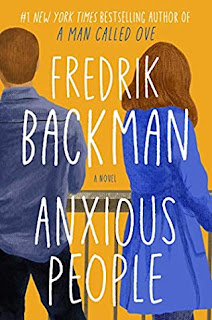 I will be honest: Anxious People made me anxious at first. I had to take a break for a while because I couldn't get past the tragedy and sadness that started the book. I wanted to trust Frederik Backman, so I took a few weeks off, read a few other things, then went back to this book.

Gender is fluid in this book. Some characters don't get pronouns, which I thought was a hackneyed parlor trick — but realized it was an important clue that was reinforced later in the story. Plus, the author bounced around with gender expectations: at first, I assumed a cheating spouse was a lesbian because it made as much sense as any other gender association.

So many pairs of people at the open house! Traditional, non-traditional, current, past, future. And so many stages of life. What an amazing microcosm.

So many surprises! I truly had no idea what was happening much of the time. The structure of Anxious People was unique, blending the past interviews with the current status and the even more previous actions, and an occasional glimpse into the future. This blending of time was important because grief is smeared across time. When tragedy happens, it's never truly in the past; you carry it with you into the present and project it into the future.

The humor and compassion of these disparate people crammed into an apartment that looked out at a bridge that meant so much to them for different reasons was pure Backman. His characters are the best and worst, the weirdest and the most redeemed, the most wounded and misunderstood, and the most unlovable and the most in need of love.

I started thinking about the people I know who have committed suicide. Some were familiar to me, some were close to me, and each ended with a degree of tragedy that leaves me breathless. "It may not be getting better now, but it can't get better if you aren't here." Would we believe that sentence if we were too dark to see it?

The character who remained very much a mystery to me was Zara. A fellow reader said she gleaned so much more from her re-read, which makes me think of all of the magic I very well may have left on the page.

I feared that A Man Called Ove was a one-off, and I couldn't bear to read a Backman book that wasn't good. Now I'm brave enough to read more by this author because he is just that good.

Which makes me think… What stuck with me the most with this book was the small fractures that occurred in characters' lives that made them appear very real, surprisingly compassionate, and beautifully flawed.