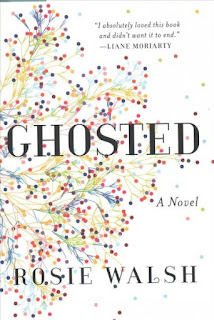 Leave it to technology to continue providing ways to humiliate ourselves — and leave it to Rosie Walsh to write a compelling romance novel to make us re-live some of our most debasing experiences.

The novel has well-constructed suspense and chapter-ending teasers that will keep readers up long past their bedtimes.

I read it hungrily, staying up late and gobbling up the savory tidbits — until a string of hackneyed tropes appeared and a character I adored was unintentionally wounded. At that point, I solved the mystery and could read at a leisurely pace as the author breezed through overwrought tension, some unbelievable relationship complications, trite storyline resolutions, and a final, maudlin conclusion.

I liked many of the characters, especially a few who popped in for only a short time on the page, and I felt as bad for them as I did for myself as the book wound down.

This book pivots on its cliffhangers, with a few big reveals along the way. This review contains spoilers, so read at your own risk.

Let us proceed, then.

Sarah is in her small, bucolic English hometown on the anniversary of a tragedy that changed her life, wearing her self-loathing like a hair shirt. Details of the tragedy are vague, and readers are left to fill in the blanks. What we do know is that afterward, her parents allowed her to live with a friend's family in California.

Now in her late 30s and in the midst of a divorce, Sarah meets a guy with the clunky name of Eddie David who is trying to wrangle a sheep in the village square. He's funny, she needs to laugh, they go to the pub, and romance ensues. One week of bliss and she's head over heels in love. They both have reasons to part, but they promise to stay in touch. They friend each other on Facebook and trade phone numbers.

Sarah does what many people have done when "ghosted," even pre-Facebook: she goes into overdrive. She obsesses, contacts him, reaches out to his friends — all the while flipping between self-loathing and heady love for Eddie. Her friends are supportive and protective of this wounded soul. As if her self-loathing could go no further, she humiliates herself on the altar of Eddie in a horrifying scene. Even one of Eddie's friends kindly suggests she stop. The story is almost an epistolary at this point, with messages/texts/posts to Eddie drive the story. All the time, her personal tragedy unfolds to readers through letters to her beloved sister.

Let's be honest: Sarah is particularly pitiful. Maybe the glut of electronic communication options makes for a good story, but it gets tiring. However, readers and Sarah can agree that after a pitch-perfect, cruel scene, she has hit rock-bottom, and she has to stop. But this is romance, and there has to be one last oft-used guaranteed romance plot complication. Suddenly, Sarah starts having familiar health issues. While hanging out with her friend Jenny, who is desperately trying to become pregnant, we start getting ham-fisted clues that even Jenny can see coming: despite being "very careful," Sarah is pregnant, and Eddie is the father. Immediately after this reveal, readers are treated to an unexpected, shocking reveal about Sarah's tragedy that is worth the price of the book.

That's when the story focus flips — and the momentum, for me, screeches to a laconic crawl.

While Sarah's energy and pathos carry the first half of the book with mystery and almost unbearable misery, Eddie's half features clinical masculine stoicism. Rather than being emotionally connected, even sympathetic, Eddie is a two-dimensional guy. He asks very obvious questions over and over that he could answer himself with one quick five-minute walk across town that could be conducted in total stealth. His mother is narcissistic, cruel, and manipulative; surprisingly, this does not make Eddie any more sympathetic a character. Between them, the story limps along until the inevitable: he finds out about the baby while Sarah is in the throes of a long, dangerous labor at the local hospital. Eddie instantly breaks his lethargy, leaping into awkward emotion that (finally) doesn't involve lots of beer. He is a caricature, and one with few, if any, endearing qualities.

The trite and unrewarding resolution features a roll call of nearly every character in Eddie and Sarah's lives. I have little patience with the contrast between Sarah's accidental pregnancy and Jenny's sterility. Sarah is rewarded for her love while Jenny is child-less. This is not the venue for deeply exploring family building options, but the intentional contrast without a whiff of alternatives is clunky and insulting to readers and characters alike. If anything, Sarah's entire life was proof of family-building beyond biological connection, and the ending completely betrays that idea.

I am not a typical audience for this genre, and I may be particularly critical of plot complications that are welcomed by more seasoned romance-novel enthusiast. However, a few tweaks would strengthen the book for me, most notably a better-constructed love interest and a recognition of non-biological family-building. Beyond that, this was a suspenseful, slow-reveal, chapter-cliffhanger novel that will take readers high and low in a modern story of love and sacrifice.

What did you like most in the story? Would you have done what Sarah did? What surprised you the most in this story? Do tell! Comment below, or send me a note to share your thoughts.
Clowndoctors England Ghosted novel relationships romance Rosie Walsh social media