Bookstore Day: My Catch Was Amazing! 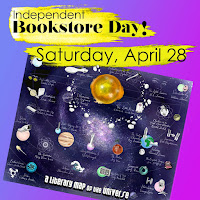 This year, April 28 was a very busy day in my household. First of all, it was World Tai Chi Qigong Day, so my family spent the cool morning at Meadowlark Botanical Gardens.

The afternoon, however, was spent with books.

My first stop was One More Page Books. In addition to oodles of tomes, the store featured a bookseller bake-off, hourly raffles, and lots of recommendations. I blew my budget at this little bookstore, but it was worth it: the staff was helpful and enthusiastic, and did I mention the bake-off? 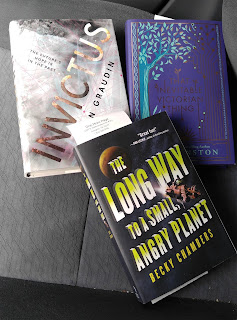 Invictus has been described as "Doctor Who meets Guardians of the Galaxy," both bonuses in my book (so to speak). I haven't read anything by this author, so I can't wait to see how a time-traveling thief meets his destiny.

Alternate history involving the British crown? Count me in with That Inevitable Victorian Thing. It takes place in the near-future, which makes it even more intriguing, and sounds a little akin to Jasper Fforde's Thursday Next series.

The Long Way to a Small, Angry Planet involves space travel, daring-do, and the feeling of a Browncoat adventure without the perplexing Chinese swearing.

My next stop was an indie used bookstore, Hole in the Wall Books, which is almost as claustrophobic as — but perhaps a tad more flammable and certainly less escapable than — the late, great Acres of Books.

I resumed my "one book per store" rule and walked out with a crime drama involving, of all things, a suspension bridge.

Suspension follows a New York police sergeant trying to stop the destruction of the Brooklyn Bridge a week after it opened in 1883. I surprised myself, considering I am still traumatized by writing an exhaustive review of Hart Crane's poem about the Brooklyn Bridge in grad school. The book and its cover reminded me of The Alienist, which may not be accurate, but the mind goes where it goes.

My last stop was Bards Alley, and although I was intrigued by the new translation of Les Misérables (which didn't stay on the shelves much longer!), I finally settled on the second book of a series I will begin this summer.

The Girl in the Tower is the second in a series about a Russian heroine, and the cover of this book was as lovely as the first. Indeed, don't judge a book by its cover, but sometimes it's impossible to not take it into account — especially if it's gorgeous and dreamy and intriguing.

When I made my way to the register, I found buttons that included images of hedgehogs and llamas. Some depicted just hedgehogs, some featured only llamas, but I chose one with drawings of both. (Oh, and a heart.)

I could have walked out with at least three other books, but I knew my debit card needed a break. Independent bookstores have fair prices, and one should always be ready to purchase a book for full MSRP (which I was, and am, and glad to do) — but it can be costly. The abundance and availability of cheap books is delicious, but in my case, it leads to sacks of books that include stenography instruction handbooks that silently judge you from the shelf until donated to the library upon college graduation. Indie bookstores help reign me in. 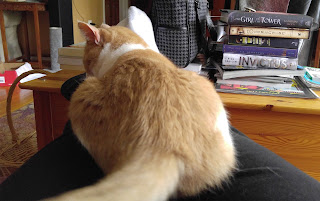 The big cat was relieved when I finally made it home so she had a lap in which to relax, and the little cat sat across the room plotting how to unseat her sister from my lap.

In the end, I assisted the local economy (three different jurisdictions, in fact!) and added to my bursting library. I haven't begun any of these gems yet, but with summer reading already in the works, I plan to start one this week. Which one would you recommend? Let me know!