How Does Your Nightstand Reading Stack Up? 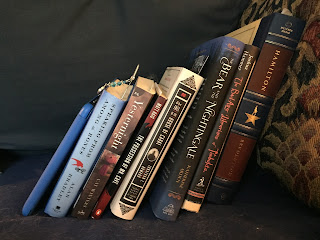 As I was dusting my nightstand, I found myself rather impressed by my stack of books to be read.

I think I need to have my head examined because I haven't finished Hamilton: The Revolution. I even have it on Audible. And yet. Unlike any other Hamilton-related experience, I am savoring the book. Plus, I just finished the chapter about Christopher Jackson, my Washington, and I want to spend an extra moment with him. I think I'll make it a summer read.

Interestingly, the book I am reading on my Kindle I also own in print — the latest translation of Anna Karenina, translated by Richard Pevear and Larissa Volokhonsky. I hadn't really pondered translations until recently, when Oprah Winfrey's embrace of the new translation was chosen for her book club, and I heard a podcast featuring a strongly praised audiobook version of Don Quixote. 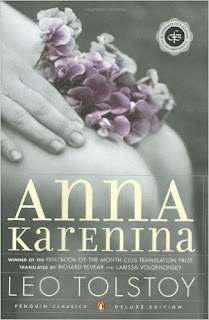 I have another translation on my Kindle, and whenever I read a delicious line in the newer book, I pull up the other translation to compare. So far, I have always, always preferred Pevear/Volokhonsky's translation. I may download the recorded book of the older translation that was so well-received last year, just to compare the page to the ear.
I actually read the first 300+ pages in January, but chose to start over this month so the entire book is fresh in my mind for my discussions next month with Carole. (This is our current Weighty Read.)

I have taken a bit of a break from Anna to read another book with Carole, The Persuasion of Mr. Cave. We read The Humans a couple of years ago, and it was one of the best books I had read in a while — so we decided to give this modest little tome a try. The foreshadowing is intense.

Of this list, I'm surprised that I have read some of every volume, except for one. I have started, put down, started another, put down, and re-started more than usual.

I must blame it on Elizabeth Kostova. 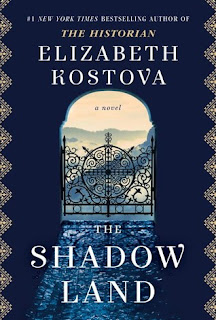 Her latest, The Shadow Lands, was not the book I expected. It's a love letter to Bulgaria, which isn't a bad thing, but the book jacket focused on what I consider the weakest storyline of the book. Had it been more aptly characterized, I would have liked it better; instead, I have to adjust my notions now the book is finished. I would have read it, anyway, mind you. I just prefer when the jacket blurb relates to the story more directly.

To be fair, she used her tools wisely, weaving between media and characters, which has served her well in the past, so the novel wasn't a disappointment. It was, however, a surprise (and not in the more pleasant way).

I am a huge fan of Cat Winters, but I don't think Yesternight is her strongest novel, either. Post-WWI America, West Coast, supernatural (but maybe not), women nearly thwarted, and trusting your own instincts — they're all interesting, but it doesn't get to where it should quickly enough, and there seems to be a stronger story not being told in the novel. (It's another I've put aside, just for a while.)

I started The Bad-Ass Librarians of Timbuktu a few times, but my mind wanders during the history portion of the book. I've tried the print and electronic books, so I think I'll give the audio a try next. (The library will come through soon, so I'll keep you apprised.)

Finally, I am working on two series: Johannes Cabal and Flavia de Luce. (Ne'er the twain shall meet, thank heavens, except on my nightstand.)

What are your reading challenges? Are you stopping and starting books? Or are you plowing through everything immediately, no holds barred? Let me know!